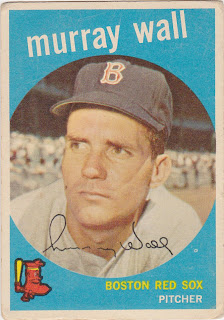 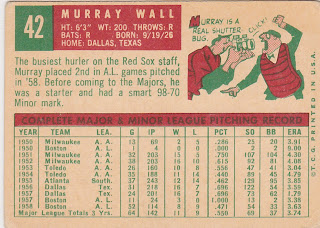 Dallas native Murray Wall was a standout at the University of Texas, twice being named and All American pitcher and helping the Longhorns to a pair of national titles. Signed by the Boston Braves in 1950 he actually made an appearance for the Bees that summer.But then it was off to the minors for the righthander. He spent six seasons as a starter working his way back to the majors having been traded to the Giants and then sold to the Red Sox with whom he re-emerged in 1957 as a reliever.

In 1958 he pitched in 52 games (2nd most in the A.L.) with 8 wins and 10 saves out of the pen. The Red Sox traded Wall to the Senators in June of 1959 in a deal that sent Dick Hyde to the Sox. He pitched once for the Nats before being returned to the Red Sox when the trade as voided due to a sore arm that Hyde had been enduring.

After '59 Wall never returned to the majors, spending some time in the Reds and Angels organizations and then retiring. He then went into the banking business in Dallas. Sadly he died of a self inflicted gunshot wound in 1971 at the age of 45.

One of my favorite cartoons graces the back of this card, Wall snaps away at a demonstrative ump. The photo, of course, was taken at Yankee Stadium.
Posted by Commishbob at 7:30 AM