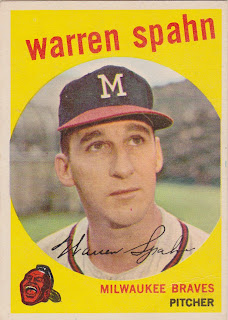 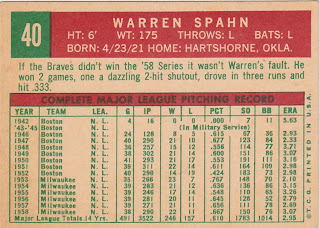 Noting perks up a blogger in a rut like posting a card of a superstar, particularly one of the blogger's favorites. So I'm really happy to present the regular issue card of Warren Spahn!

A native of Buffalo, N.Y., Spahn was signed in 1940 and came to the majors with Boston in 1942. The Bees' manager at that time, Casey Stengel, questioned the young Spahn's 'guts' when he refused to throw at the Dodgers' Pee Wee Reese. After spending three years in the military serving in Europe during World War II (and receiving a Purple Heart among other decorations), Spahn returned to the majors in 1942 after Stengel had been fired. He stayed for two decades and finished a remarkable run with the Braves with a final season split between the Giants and Mets in 1965.

He became the winningest left handed pitcher in the history of baseball (and fifth over-all) with 363 victories. He could likely have had 400 had he pitched during the three years he had served but Spahn said he 'matured' in the service and it helped him in his career.

Some highlights as listed on his Baseball Reference Bullpen page:
There are many places to read about Spahn on the web including his Hall of Fame page, NY Times obit, and his SABR entry. If nothing else read this Sports Illustrated article that is an adaptation of a book which chronicles the epic 16 inning(!) pitching duel between Spahn and Juan Marichal on July 2, 1963. Great stuff!

And don't miss this commercial he did for Post Grape Nuts and his endorsed practice bat and ball offer.

And in parting I'll leave you with what has to be one of the best Sports Illustrated covers, ever!

Behold the magnificence of Warren Edward Spahn, circa 1956. 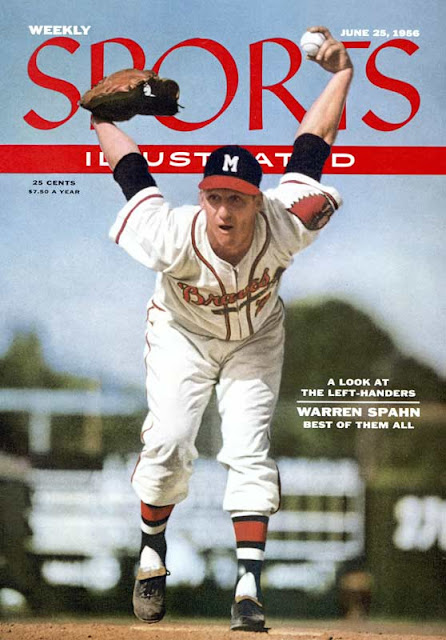