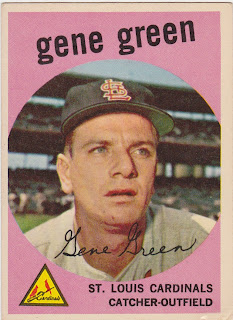 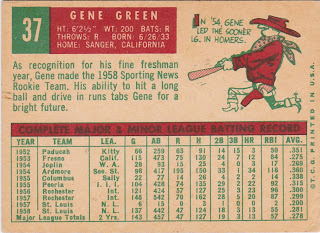 Gene Green signed as an outfielder with the Cardinals in 1952 and spent six productive seasons in their system before his brief 1957 debut. Along the way he had learned to use the 'tools of ignorance' and in his big league career he split time between catching and rightfield.

In 1958 Green had the most at bats of his career when he got into 137 games hitting .281 to go with 13 homers and 55 RBI. Back in the minors for the bulk of the next two seasons he did appear in one game for the Orioles in 1960 after coming over in a trade. He was selected by the Senators in the expansion draft after that year and played quite a bit for the first year club in 1961. His stat line read 18/62/.280 in 110 games. He also led the league in double plays....grounded into. He had done that in 1958 for the Cards as well. That makes him one of the few to complete that dubious, well... double play. A very quick peek at Baseball Reference shows that Miguel Tejada also accomplished this feat.

Green carried his gloves to Cleveland and Cincinnati for a couple final seasons, doing a lot of pinch hitting, and retired after 1963. He died in 1981 at the age of 47.

Pink card with a shot taken in the Polo Grounds. Decent shape, too.
Posted by Commishbob at 6:30 AM