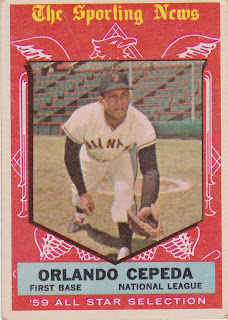 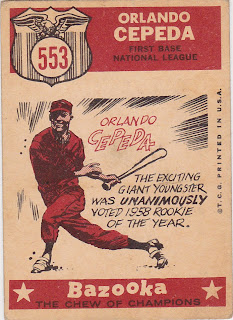 Can't blame The Sporting News and Topps for putting the up and coming Orlando Cepeda on the NL All Star card. He's a logical choice coming off his impressive rookie season of 1958. And unlike a couple of players in this subset (Wes Covington comes to mind) Cepeda actually made the '59 All Star team. He started the first of the two ASGs held that summer going 0-4 but he can say that he started while Stan Musial and Frank Robinson, both selected as first basemen, sat and watched. Cepeda did not play in the second of those games a month later.

His regular card in this set is a nice one and while I'm not crazy about the design of these All Star cards this one gets points for a nice posed shot taken at Seals Stadium. I don't know why Topps didn't use this same 'show the background inside the frame' design on the team and special multi-player cards in '59. Or have you heard me gripe about that before?
Posted by Commishbob at 7:00 AM

Email ThisBlogThis!Share to TwitterShare to FacebookShare to Pinterest
Labels: All Star, Hall of Fame, Orlando Cepeda