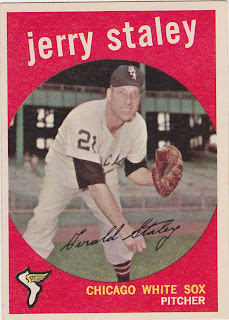 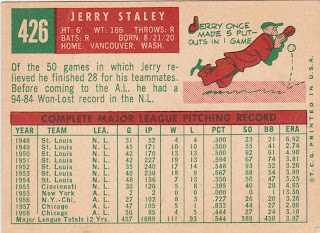 In a 15 year career that ended in 1961 righthander Jerry Staley went from being a reliever to an All Star starter in the NL then to All Star reliever in the AL. Staley began his baseball career with a couple of very impressive seasons in independent ball in the early 1940s before heading off to serve his country in WWII. After returning, and having been signed earlier by the Cardinals, Staley debuted in the teams bullpen in 1947. By '49 he had become a starter, at least part time, and by 1951 he was winning 19 games and he sustained that pace through two consecutive All Star seasons.

By 1954 his fortunes had reversed and the Cards sent him to the Reds and then he moved to the Yankees before finding his 'second wind' with the White Sox in 1956. In '57 became the Sox' main bullpen weapon and remained so through 1960 when his 13-8, 10 save season earned him another All Star appearance.

He made four appearances with the Sox in the 1959 World series gaining a save and taking a loss in Game Four when he allowed a homer to Gil Hodges in the eighth inning. He retired the other six batters he faced that day and overall had a very nice Series.

Staley's SABR page is chock full of info on his career including his time in the service and unique way he ended up with the Cardinals.

Looks like another Yankee Stadium shot although I don't see those 'windows' in many of these shots. Seems like every White Sox pitcher in the set has the same pose in the same place.

I always like to search out featured players' other cards. While looking at Staley's I saw his 1958 Topps card (love that cap s-o-x and the Flying Sox logo!): 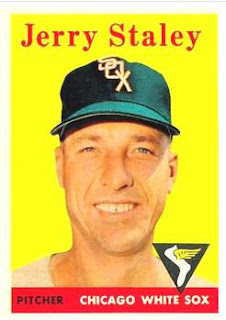 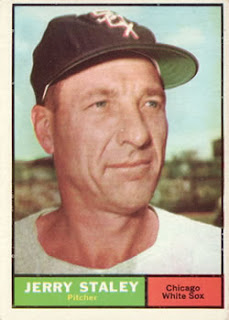 He aged about a decade between those two shots, yes?  Maybe it's the lighting.
Posted by Commishbob at 7:00 AM