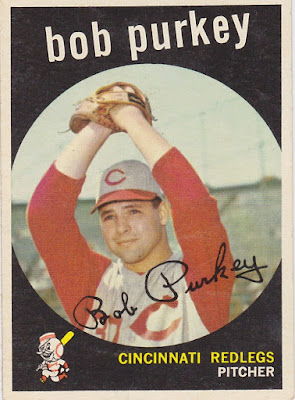 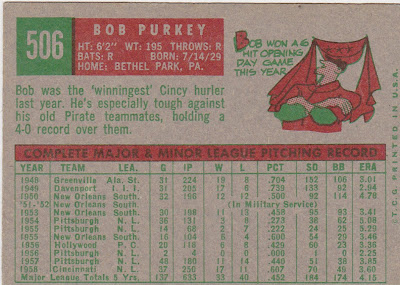 Pittsburgh native Bob Purkey began and ended his major league career with the Pirates but it was the seven seasons he pitched in Cincinnati that were the most productive. Signed by the Bucs in 1948 Purkey worked his way up through the minors, battling injuries and taking two years off for military service (he pitched for some highly successful Army teams) and getting several short looks with the big club before he established himself in 1957. He had learned the knuckleball from Branch Rickey along the way and he went 11-14 that year for a 62-92 seventh place club. Traded that winter to the Reds for Don Gross (who won only seven games in 2+ seasons in Pittsburgh) Purkey became one of the better pitchers in the NL, winning 17 games and making the All Star team.

He won double digit games in all but one of his seasons with the Reds, was a three time All Star, and in 1962 he went 23-5 with a 2.81 ERA and finished a distant third in the Cy Young voting behind winner Don Drysdale despite having numbers that compared quite well with the Dodger righty.

He pitched and lost Game Three of the 1961 World Series against the Yankees. In that game he allowed only six hits in a nine inning effort but homers he gave up late to Johnny Blanchard and Roger Maris cost him a 3-2 decision. He came back to appear in the fifth and final game of that Series as one of seven guys that Fred Hutchinson dragged out of the bullpen in a futile effort to stop the Yankee momentum.

He pitched one season for the Cardinals (1965 winning 10 games) and then returned to Pittsburgh for 1966 where he appeared in just 10 games before being released and retireing.

After baseball he founded an insurance agency which still operates under his name. As always the black frame on this card makes the red Reds uni stand out. Looks like Los Angeles Memorial Coliseum is the scene of the photo shoot.