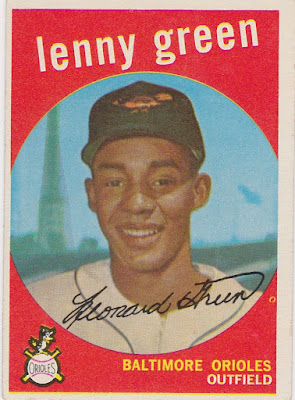 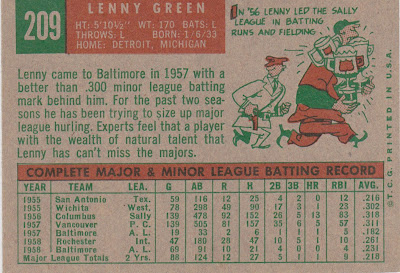 Always nice to see an Oriole pop up, even one that didn't play a whole lot in Charm City. Baltimore signed Lenny Green in 1955 out of Detroit's Pershing High School. He put up some impressive minor league numbers and earned himself a look with the big league club in 1957.

With his numbers declining he began bouncing around the AL including a second ride with the Orioles. He recaptured a bit of magic in Boston in 1965 when he earned over 400 plate appearances. He finished his career with the 1968 Tigers but was not around at season's end to possibly enjoy the Tigers World Series spoils.

He worked with the Ford Motor Company for 27 years after his baseball days. His SABR bio (as usual) is chock full of interesting details about Lenny Green. And early in his career Green was considered (by some) to be the first 'true' African-American player for the Senators. Details in an interesting web page found here.

I love the fact that the card depicts Green's smiling face with Memorial Stadium in the background. I think that style of light tower was unique to that dear old ballpark.
Posted by Commishbob at 7:00 AM