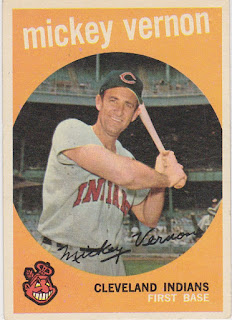 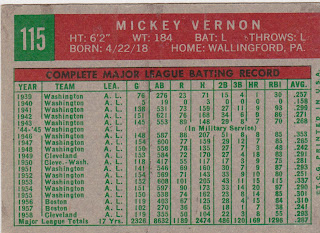 Slick fielding first-baseman Mickey Vernon, like the recently featured Gene Woodling, was a very good player for a very long time. In a career that stretched from his debut with the Washington Senators in 1939 through his final games, as an activated coach for the Pirates during the 1960 pennant chase, Vernon won two batting titles, three times led the AL in doubles, made seven All Star squads and finished in the top five in MVP voting three times.

Signed out of Villanova University in 1937 Vernon put together some impressive minor league numbers before his 1939 debut in which he totaled more than 300 plate appearances and hit .257. He spent most of the next season in the minors but when he returned to the Nats in 1941 he was ready, hitting .299 and driving in 93 runs. He continued to put up some exceptional numbers in Washington through 1955 with a side trip to the Pacific for two years during WWII and a year plus stint with the Indians along the way.

Traded to Boston for the 1956 season Vernon played for the Sox for two years before being obtained for a second time by the Indians for 1958. He was a member of the Milwaukee Braves by the time this card was issued in '59 (a year too late for the Braves' Series against the Yanks). He retired after that and was coaching with the Pirates when he was activated and 'unretired' in September of 1960 in time to pinch hit nine times for the Bucs. His Championship ring from that season represents the only postseason experience he enjoyed in his long and otherwise successful career,

He managed the 'new' Washington Senators during the first two+ years of the expansion club's existence ('61-'63) and then spent many years coaching at the big league level, managing in the minors and serving as a hitting instructor in several teams systems. He passed away in 2004. He is commemorated with a Little League named in his honor in his native Pennsylvania. He also is the focus of the Mickey Vernon Sports Museum.

His SABR bio is a fun read but Chrome issued a malware(!) alert when I went to it so I'll back away for a day or so.

That of course is Yankee Stadium behind Vernon on his orange framed card. From all accounts his smile was as much a part of his career as his bat. The cartoon-less, 'wall of text' cardback says "This guy was doing something right!" That all makes this a pretty nice card, don't you think?