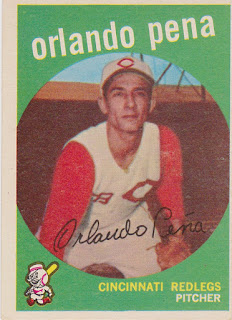 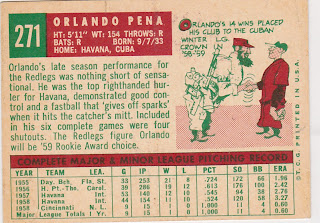 Havana native Orlando Pena debuted with the Cincinnati Reds in 1958 after being picked up from an independent team in Daytona Beach and spending three impressive seasons in the minors.

He then embarked on a 14 season career with eight clubs that spanned from the '58 debut until 1975. His most successful run came with the Kansas City A's from '62 through '64 when he was a member of their starting rotation. His 20 loss 1963 season (he won 12) was actually one of his best numbers-wise.

After that he spent time in six other organizations and kicked around the minors as well and even pitched batting practice for the Royals between major league stints in the early 70s. In 1972 he was a combined 22-3 with Miami and Rochester in the Orioles chain. Oddly he led the AL in fielding percentage as a pitcher in 1963 and then led in errors in 1964.

After leaving the game in 1975 he resurfaced very briefly in 1979 with the independent Miami Amigos with a six frame outing for that Inter-American League club. Davey Johnson managed that team which was part of a brief, failed experimental league.

Nice to see Fidel Castro make an appearance on the back of Topps card, isn't it? And just because I can I'll show you his final Topps card, from 1975. 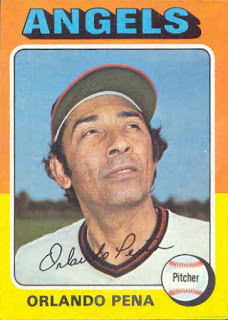