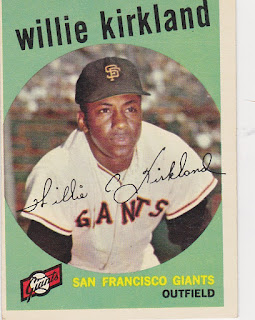 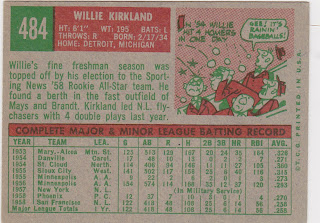 Outfielder Willie Kirkland played nine seasons of major league ball after being signed by the New York Giants in 1953.  He worked his way up through the Giants' chain and kicked some serious minor league butt in the process by batting well over .300 and averaging 30+ homers a season between '53 and '56.
He served the next year in the military and debuted with the Giants in San Francisco a few weeks into the 1958 season. He immediately took an outfield slot and kept it for three years hitting over 20 homers each year.
He became the odd man out in a crowded Giants' outfield and was traded to the Indians for 1961. In three years with the Tribe he played as a regular and displayed his above average power in cavernous Municipal Stadium. He was traded to the Orioles for 1964 and on to the Senators in August that year. He was a regular into the 1966 season even as his numbers slipped. He spent 1967 in the minors.
Released after that season he played in Japan for an additional six years.
In 1961 Kirkland had an unusual day which is chronicled on the Hardball Times website. He homered in his first three at bats against the White Sox and then drew a walk. With a four homer game staring him in the face as well as two men on while his club trailed by a run, Kirkland laid down a sacrifice bunt to advance the runners to second and third. It turned out that the Indians couldn't score the runners but the story illustrates Kirkland's selfless baseball style.
These sea-foam green cards have really grown on me. There are 19 of them among National Leaguers.