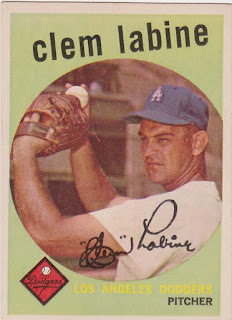 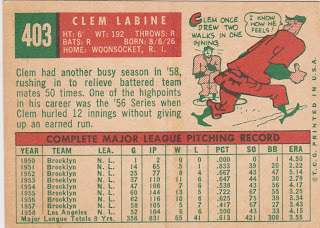 Gonna post this awesome Clem Labine without doing too much research. I've been in NYC for awhile and am currently knee deep in projects to catch up on.

So, here's Clem who is the child of Canadian immigrants and spoke only French until the age of seven. He was a good enough athlete as a kid to catch the eye of the Dodgers organisation and he signed in 1944 after dropping out of high school.

He spent a year in the service and worked up thru the Dodger's chain until he debuted in 1950. Unlike many relievers of the day he was not a converted (or failed) starter. He led the league in saves twice and games pitched once. He appeared in five World Series, four with the Dodgers and he won two rings with them. He also pitched for the Pirates in the monumental slugfest that was the 1960 Series against the Yanks and he won a ring that year, too. His postseason numbers took a real hit in that Series.

He was 77-56 with 97 saves in twelve major league seasons. 70 of those wins and 86 of his saves were with the Dodgers. He hit three homers in the bigs, all in 1955 and those were the only hits he had all season in 31 at bats. That's a strange stat.

His New York Times obit from 2007 is a good read and this excerpt is really all you need to know about Clement Walter Labine:

Through those summers of the 1950s, Labine was a confident figure, relieving pitching mainstays like Erskine, Don Newcombe, Preacher Roe and Johnny Podres.
“If you had a lead, there was this thing where about the seventh or eighth inning, where he’d get up, sort of a ritual, and walk down to the bullpen,” the former Dodgers pitcher Roger Craig told Bob Cairns in “Pen Men,” an oral history of relief pitching. “Clem was kind of a cocky, arrogant type, which was good. I liked it. He’d fold his glove up and put it in his pocket. I can see him now, strutting down to the bullpen and the fans cheering.”

The Dodgers website and the L.A. Times have more on Labine. Love the expression on his card and the seafoam green frame is sweet. Sorry Clem, you deserve a better post that this.