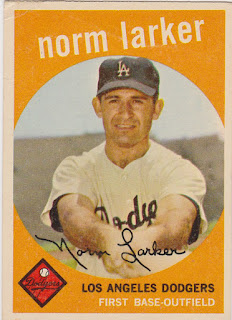 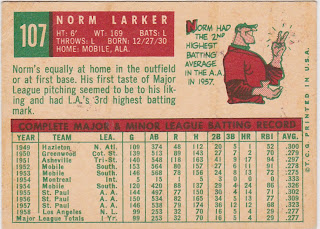 Norm Larker began as a pro in 1949 in his hometown of Hazleton, Pennsylvania and caught the eye of Brooklyn scouts who signed him for the 1950 season. Larker began a long trek through the loaded Dodger system as an outfielder before he finally emerged with the now-Los Angeles Dodgers in 1958.

In his rookie season he batted .277 in 99 games. The following year, 1959, he played mostly first base and picked up a World Series ring playing in all six games and hitting .188. In 1960 he moved to first base spelling Gil Hodges and had by far his best season. Hitting .323 he finished 2nd in the batting race and made the NL All Star squad.

His production and playing time declined in 1961 and he was drafted by the expansion Houston franchise for which he played one year. He was traded to the Braves and then to the Giants late in 1963. That was his last season in the majors although he played some minor league ball and also played in Japan through 1966.

Pretty standard card for this set. That's the LA Coliseum in the background.

The September 10, 1962 issue of Sports Illustrated featured a bit of by-play that included both Norm Larker and a player whose card was featured a week or so ago, Hal Woodeshick:

The Houston Colts put on quite a show for early arrivals in Cincinnati's Crosley Field recently. First, Pitcher Hal Woodeshick and Catcher Jim Campbell almost had a fight when Campbell tried to hurry his teammate out of the batting cage. Woodeshick refused to be hurried, saying, "I'm taking my cuts." "What for?" said Campbell. "You're never around long enough to bat." Woodeshick went for Campbell and the two had to be separated.
Then Infielder Bob Aspromonte, upset because First Baseman Norm Larker wouldn't let him use one of his bats, threw it the length of the dugout and broke the knob end. Then he pulled all of Larker's bats out of the rack onto the concrete floor. Larker didn't go for Aspromonte—just for Aspromonte's bats, pulling them out of the rack and flinging them to the floor, too. When none broke, he took one and started hitting it against the concrete steps.
"What in hell is going on here?" suddenly roared Manager Harry Craft, and an uneasy peace settled over the Houston Colts.