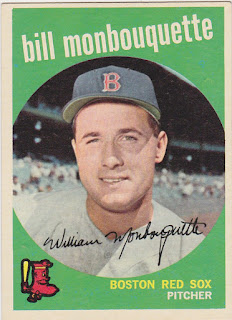 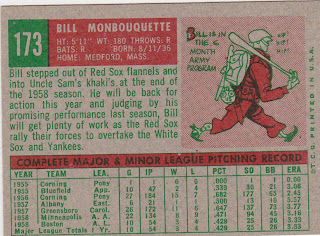 Hey, it's Monbo!! Bill Monbouquette's (that's the last time I'm typing that!) career fell right in my wheelhouse as a young fan. He had six pretty solid seasons with the Red Sox between 1960 and 1965. He was six games over .500 for those seasons pitching on some pretty lousy Red Sox clubs, clubs that only once finished as high as sixth.

The Medford, Mass. native signed with the Sox in 1955 (and he spent that very night in jail!) and three years later he debuted in Fenway with a five inning no-decision outing against the Tigers. He went 3-4 that year with a 3.18 ERA, returned in 1959 to go 7-7 while splitting 34 appearances between starting and the bullpen. In 1960 he grabbed a place in the rotation and held it for awhile.

While with Boston he pitched a no-hitter against the White Sox in Comiskey in 1960 and had a 17 strikeout performance against the Senators in 1961. Oddly that was his only "double digit K" outing of the season. Monbo was traded to the Tigers for the 1966 season and following his release the next year pitched for the Yankees and Giants before retiring in early April of 1969. He never appeared in a post season game but he was a three time All Star, starting (and being roughed up) in the first of the two 1960 games. He talks about that game (and much more) in a two part Baseball Prospectus interview which is linked in the last paragraph of this post.

Here's a note from Wikipedia: On September 25, 1965 in a game against the Kansas City A's, Monbouquette was the starting pitcher versus 58-year old Hall of Famer Satchel Paige. Monbouquette threw a complete game for his tenth win of the season, but became the final strikeout victim of Paige's in the 3rd inning.

This is Monbo's rookie card and the picture shows him with as close to a smile as you're going to get outta him. If you get the idea I like Monbo you are correct. He struck a cord with me and my friends back in the day, and I don't know why. Maybe it was just his name or maybe it was the way Phil Rizzuto butchered it.

About ten years ago he was diagnosed with Acute myeloid leukemia (AML) but he's still out there kicking and is as feisty as ever according to some reports.
Posted by Commishbob at 6:30 AM