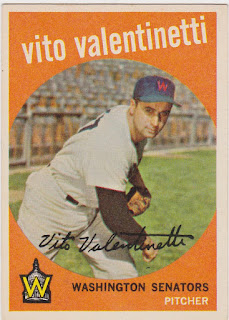 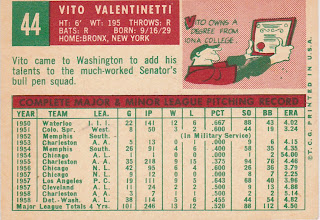 Vito John Valentinetti, if that's not a classic Italian name I don't know what one is. And I speak with the authority of one who's mother's name was Esposito.

Anyway, Bronx native Vito (I am not going to keep typing his last name) signed with the Chicago White Sox out of Iona College in 1950 (he's a member of their Hall of Fame) and then, after a brief minor league fling, spent two seasons in the military.  He pitched in one game for the Sox in 1954 and went back to the minors.

Following that he was acquired by the Cubs for 1955 and spent parts of 1956 and early 1957 with them before being traded to the Dodgers for whom he never pitched at the major league level. Before the '57 season was over he was purchased by the Indians. They traded him to the Tigers in March of 1958, and then the Tigers dealt him to the Senators that June.

He went 4-8 with the Nats (with a horrendous ERA) through 1959. Even so he had been traded around Opening Day of '59 to the Orioles but the trade was voided (maybe the O's thought his frequent flyer miles were coming in the trade) and went back to Washington to finish the season. He had a 13-14 career W/L mark in 108 games including 15 starts.

The O's did pick him up for 1960 (I hope someone is taking notes) but he stayed in the minors and then retired. Following his playing (and traveling days) he spent many years as batting practice pitcher for both the Mets and Yankees.

I'm not sure why this card appears sort of 'washed out' in this scan. The actual card is really a nice bright orange. I might have to dig up the book and read about my scanner settings.

I'm also not sure where this shot was taken. Looks like it could be a spring training facility but with Vito's convoluted career itinerary it could be anywhere.