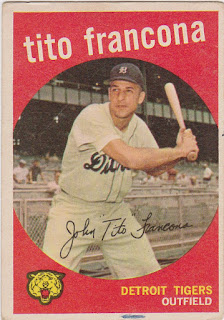 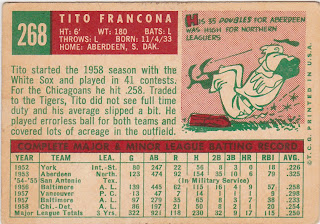 John Patsy "Tito" Francona (yes, his middle name is 'Patsy.. I bet he grew up tough) signed with the St. Louis Browns in 1952 and spent a couple of years in their chain before Uncle Sam called and he spent a few more in the service. By the time he made the bigs the woeful Brownies had moved to Baltimore and become the woeful Orioles.

Francona stepped right in and played full-time in the O's outfield in 1956 hitting .258 with nine homers. He finished tied with Rocky Colavito for second in the Rookie of the Year balloting in the AL that season. That means he and The Rock each got a vote while Luis Aparicio got the other 22!

Despite that he spent some time in the minors early in the 1957 season and when he did return he wasn't quite able to produce consistently. He was traded to the White Sox in December of 1957 and split the '58 season between Chicago and, after a trade, the Detroit Tigers.

Another trade, in March of 1959, sent Francona to the Indians and it was in Cleveland that he finally established himself. That season he had a 'Brady Anderson' year hitting 20 homers and batting .363 for no apparent reason. Harmonic Convergence perhaps.

He continued to play well for the Indians over most of his six seasons with the club. From 1960 through 1963 he's pop up in the lists for Top Ten in various hitting categories.

After his run with the Indians Francona went on to play for the Cardinals, Phillies, A's and Brewers. For the most part he was no longer an everyday player but he did hit .286 with almost 400 plate appearances with the '68 Braves. And in 1969 he hit .319 in limited play in a season he split between the Braves and A's. His 1970 release by the Brewers marked the end of his career.

Tito Francona is, of course, the father of Terry Francona who piloted the Red Sox to much success (two titles) in the last decade, managed the Phils before that and is the new skipper in Cleveland, completing a circle of sorts.

Tito also holds a place in my heart because he wore the #44 for the Orioles which was 'my' number back when I was wearing one.