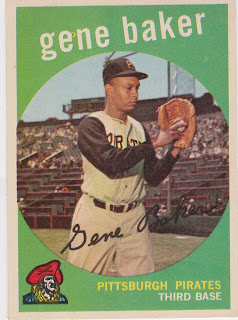 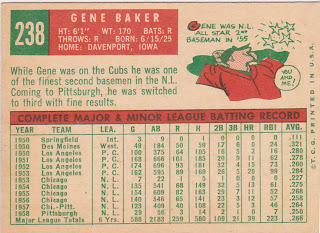 Both Baker and Banks were shortstops but the Cubs moved Baker, older than Banks by 6 years, to second and in late '53/1954 they formed the first African-American DP combo in major league baseball. Baker played for the Cubs until he was traded to Pittsburgh early in the 1957 season, making the 1955 NL All Star squad along the way. With the Pirates he appeared in the 1960 World Series, something his pal Banks was never able to do.

But it was both before and after Gene Baker's active years that me made a larger impact. Coming out of St. Ambrose College in his native Davenport, Iowa and after a year in the military he played for the powerhouse Negro League Kansas City Monarchs until he caught the eye of the Cubs and was signed in 1949.

After he had retired as a player in 1961 he was named manager at Batavia, NY, the Pirates' Class D farm club thus becoming the first African-American to manage an affiliated minor league team. He later joined the coaching ranks in Pittsburgh and became the second African-American coach in the majors (Buck O'Neil preceded him by a year).

And finally Baker became the first African-American to manage a big league club when he took over for Danny Murtaugh with the Pirates during a short suspension. He was a top scout for the Pirates in the Midwest for over 20 years. He died in 1999.

The Gene Baker card below is my original one. When I scanned it a few weeks back I saw that it was pretty shopworn, more so than the scan reveals. There is a nice sized crease, somewhat soft corners and it had lot of crud on it in addition to it being faded a bit. So I decided that Gene deserved a better representation and I found the one at the top on eBay for about a buck fifty shipped. 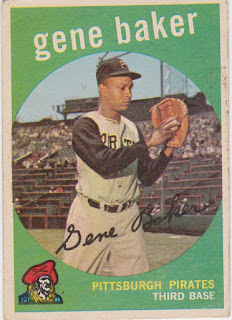 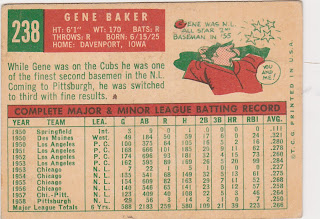