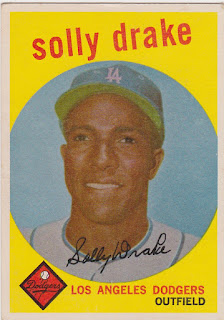 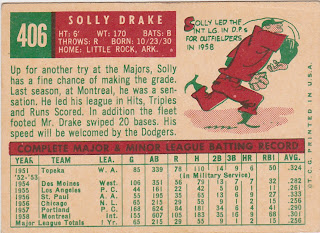 Outfielder Solly Drake was signed out of Arkansas by way of the Canadian amateur leagues by the Chicago Cubs in 1951. After a nice '51 season at the 'C' ball level Drake spent a couple of years in the military and then returned to resume his climb up the Cubs' ladder. He continued to impress and got an extended look with the Cubs in 1956. He had decent numbers, hitting .256, but spent the 1957 season in the minors again and hit well enough to entice the Dodgers to acquire him for 1958. His year with their AAA Montreal club was good enough to get him a card in the '59 set. Topps obviously expected big things.

He only got nine at bats that year however and was sold to the Phils in June. He failed to hit much and never returned to the big leagues. He spent his final two seasons in pro ball in the minors.

Solly and his brother, Sammy, were the first African-American brothers to play in the majors. He is currently (and has been for 25+ years) the pastor of the Greater Ebenezer Missionary Baptist Church in Los Angeles.
Posted by Commishbob at 6:00 AM