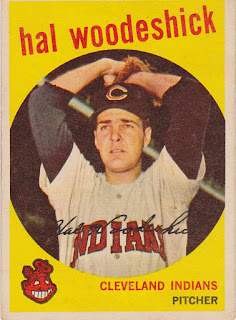 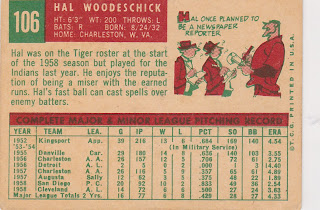 Lefty Hal Woodeshick signed on with the Philadelphia Phillies in 1950 but kicked around with several organizations before he established himself with the Indians in 1958. He continued a nomadic baseball life as a spot starter and reliever until 1962 when he found himself in Houston and, after a poor year in the rotation, won the job as the Colt 45s' closer.

Between 1963 and 1965 he had 51 saves including a league leading 23 in 1964. Over that three year period he pitched 180+ innings to earn those 51 saves. In contrast Jim Johnson had 51 saves for last season's Oriole club and needed only 69 innings to achieve that. Different time indeed.

Woodeshick (and note that his name is misspelled on the card back!) was dealt to the Cardinals during the 1965 campaign and pitched through the 1967 World Series. He retired after that. During his career he had a reputation as a terrible fielder. That was based almost completely on a mental block that interfered with his ability to throw to first base, particularly on bunts. Colt/Astros G.M. Paul Richards and coach Cot Deal worked long and hard to help him overcome that.