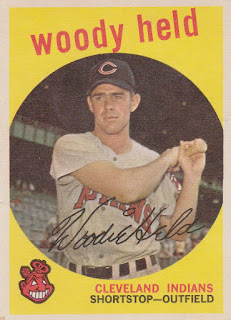 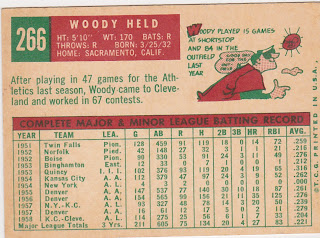 Topps insists on calling him "Woody" but I always thought it was "Woodie" and Google seems to support me. Anyway Woody/Woodie Held was a Yankee signee in 1951... made his debut (a brief one) with the Yanks in 1954 and was back (again briefly) in 1957 but was dealt to the Athletics early in the season... he had 20 homers that year and actually garned enough MVP votes to land in the top 20... traded to the Indians in '58 he became that teams regular shortstop... remained a starter either at short or second in Cleveland thru 1964, displayed good power along the way...he was the first Indians' shortstop to hit at least 20 homers in a season.... dealt to Washington for 1965 that was his last year as a starter... moved on to the Orioles, Angels and White Sox to finish his career playing both infield and outfield... retired after the 1969 season.
After he retired Held raced snowmobiles around the country, played in charity golf tournaments, hunted, fished, four-wheeled, ran a pizzeria in Dubois, Wyoming and started the town's first Little League. He died of brain cancer in 2009. A pair of good articles about Woody held are here and here.
Yet another Yankee Stadium shot, a standard 'follow through' pose. Still, it's a nice card of a guy who seemed to be very well liked during his playing days. BTW he was a member of the 1966 Orioles championship team but didn't make a World Series appearance.
Posted by Commishbob at 10:50 AM