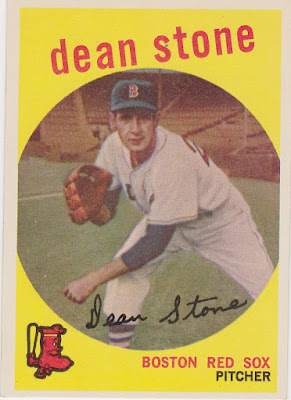 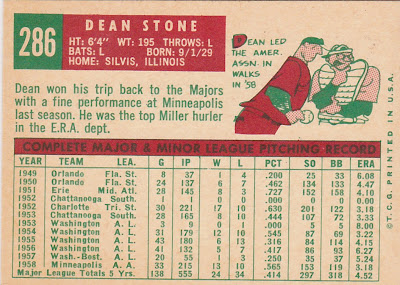 Dean Stone was a Cubs signee who put in quite a few minor league innings before earning a job with the Senators in 1954, He went on to have a three year run as a spot starter/reliever in D.C. That 1954 season was his best, by far. He earned 12 of his career 29 wins that year. He earned an All Star berth and became the first pitcher to win an All Star Game without retiring a single batter (He threw out Duke Snider trying to steal home). The story is contained in this Washington Post article which ran when the same thing happened with Nats' reliever Tyler Clippard in 2011.

Stone kicked around the majors pitching briefly for the Orioles, Colt .45s, Red Sox, Cardinals and White Sox through 1963. He finished his active career with a year in Japan in 1964.

This card appears to be a 'painted' retouching of a photo taken somewhere other than Yankee Stadium. It has stone in home Red Sox duds but whether or not that's what the original picture showed is debatable. This copy is clean and well centered. Nice card.
Posted by Commishbob at 9:04 AM