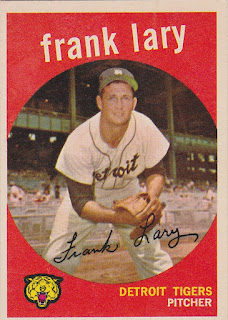 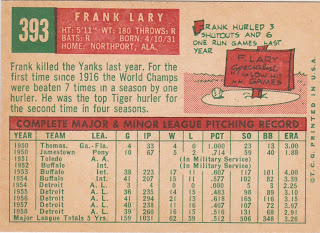 The back of Frank Lary's card tell you all you need to know about him for the most part. He was best known  as a 'Yankee Killer' and he gained a lot of that reputation in 1958 when he beat the Bombers seven times. Not very likely to happen nowadays. For his career he was 28-13 against the Yanks.
After some impressive minor league work sandwiched around a stint in the service Lary was called up for a peek at the majors in September of 1954. He made the Tigers' rotation for good in '55 and put together some impressive numbers even if he did finish a game under .500. For seven seasons, from '55 through '61 Lary was part of a starting staff that included Jim Bunning, Don Mossi, Paul Foytack and others who generally outperformed the club's hitters resulting in mostly middle of the pack finishes. But in 1961 the Tigers gave the Yanks a run for their money and Lary led the way with 23 wins.
Elbow problems and other nagging injuries ended Lay's run as a front line pitcher in '62 and he finished his career seeing short stints with the Mets, Braves  and White Sox. He ended with 128 wins, a 3.39 ERA, two All Star selections and a Gold Glove.
SABR has a detailed bio of Lary right here, including info about his father and brothers, one of whom had a taste of the bigs and most of whom starred in one sport or another at the University of Alabama. A story behind the leg injury that led to the end of Frank Lary's career is here.
Pretty standard Topps posed shot on this card. It's from a spot in front of the Yankee Stadium stands. I wonder if any Yankee fans were wishing him any bad luck right there.
Posted by Commishbob at 7:23 AM