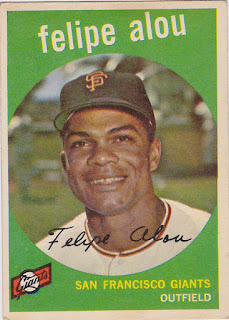 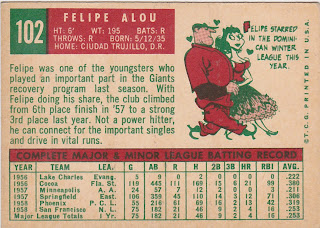 Felipe Alou is, of course, the oldest of the three Alou brothers to make their mark in the major leagues and is credited with being the first Dominican player in the majors. The brothers played together for the Giants late in the season in 1963. After a two and a half year successful minor league tune-up Alou made the Giants' roster in 1958.
He steadily gained playing time and by 1961 was the Giants regular rightfielder. He had a solid if not spectacular run in San Francisco and was a prt of the Giants 1962 NL title club. He made the All Star team that season and with 25 homers, 98 RBIs and a .316 average it was his best out on the west coast.
Alou was traded to the Braves after the 1963 season and played in Milwaukee and Atlanta through 1969. He put up some outstanding numbers there while transitioning to the 1B position. He made his second and third All Star teams with the Braves and helped guide them to the first NLCS in 1969.
He played centerfield primarily for Atlanta in his final season or two there and was sent on to Oakland for the 1970 season. He had several productive season as an outfielder and firstbaseman for the A's and Yankees before landing in Montreal and then back in Milwaukee for a very brief trial with the Brewers.
He coached for the Expos until given the manager's slot in 1992. His club took the NL East in strike interrupted 1994 and he was named NL Manager of the Year. He was dismissed in 2001, served as bench coach for the Tigers in 2002 and re-joined the Giants as their manager in 2003. His team won the West Division that season. Alou remained at the Giants helm through 2006.
His baseball family ties are well known. Brothers Matty and Jesus had notable careers in the majors and his son, Moises did as well. Moises palyed under his father for both the Expos and Giants. It doesn't stop there, Felipe Alou's cousin Jose Sosa (briefly) as well as nephew Mel Rojas were major leaguers.
Outside of a bit of dis-colorization this is a nice '59. I like the green frame around Alou's smiling portrait. Not sure what to make of the cartoon, though. Is that a Dominican groupie?
The Alou Brothers.

Posted by Commishbob at 7:50 AM