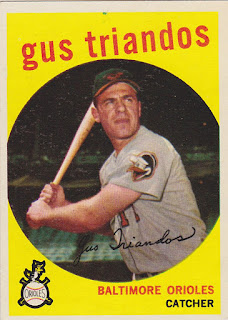 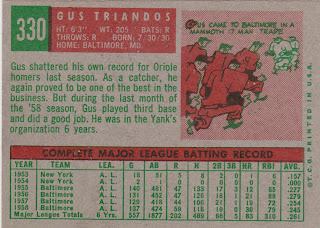 Gus Triandos was a Yankee signee who appeared briefly in pinstripes in 1953 & '54. He was dealt to the Orioles for the '55 season in a deal that included 17 players total and is far too complicated to explain. He spent eight seasons with the Orioles and showed quite a bit of power, especially playing in the then cavernous Memorial Stadium. His thirty homers in 1958 established the record for catchers at the time.
Triandos caught two no hitters and made three All Star squads. He also bravely faced the challenge of catching (or attempting to) Hoyt Wilhelm's knuckler using the oversized glove pioneered by Paul Richards. Ina a game early in 1959, he allowed four passed balls catching Wilhelm. A year later he allowed three in one inning.
He attempted one stolen base in his entire 13 year career. And he made it! That stolen base came on the last day of the '58 season in Yankee Stadium in the second game of a doubleheader. He pinch singled for Joe Ginsberg in the top of the ninth and promptly stole second while (I can only assume) Yankee back-up catcher Darrell Johnson watched in amazement, too stunned or tired to make a throw.
Triandos spent time with the Tigers, Phils and Astros before he retired in 1965. He's one of three Orioles to have a street named for him in Baltimore. The other two are Cal Ripken, Jr. and Brooks Robinson.
This is another favorite card of mine. I think I've upgraded it at least twice. This third copy is pretty sharp. I love how the Bird head sleeve patch is shown front and center. That and I just like Gus. From all accounts he's still quite a character.
Posted by Commishbob at 12:48 AM