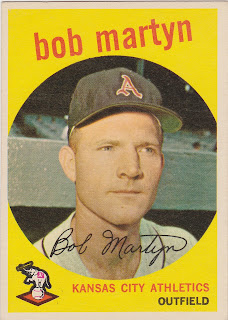 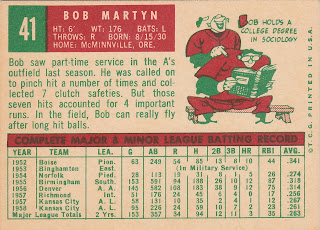 In a nutshell... Idaho native who starred at Linfield College in Oregon where he double-majored in mathematics and sociology and he graduated cum laude. ... a 1952 Yankee signee (another damn Yankee signee!?!?)... spent about four and a half seasons in their chain with a year off for military service... traded to the A's (no shit) in 1957 and spent '57 and '58 as a part time/platoon outfielder....hit his first (of three) career homer off Bob Turley of the Yanks on September 15 of that year.... traded back to the Yankees early in 1959 but spent the year in the minors.... split the 1960 season, his last, between Yankees' and Reds' farm clubs... he ended up with a respectable .263 average in what amounted to a full season of at bats... looks like a nice guy... he's a member of the Linfield College Hall of Fame... so is his father.

Nothing special about this card. Standard 'stand in front of the visitor's dugout at Yankee Stadium' shot. Mine is in good shape. It's an upgrade.
Posted by Commishbob at 8:41 AM