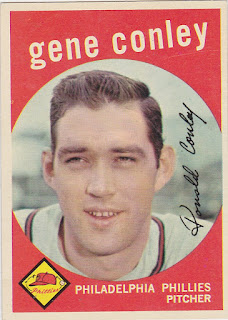 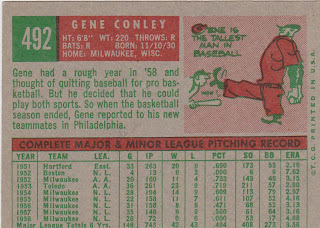 Wikipedia states that Gene Conley is the only man to play for championship teams in two of the major sports. Until proven otherwise that's good enough for me.

On Oklahoma native, he grew up in Washington state and played for Washington State University, Conley was a basketball, track and field (high jump) and baseball star who signed with the Boston Braves in 1949. He had been scouted by and had offers from many MLB clubs as well as pro basketball teams. Interestingly Conley was not drafted to serve in Korea as were many of his contemporaries. The Army considered him 'too tall' at 6'8"

After putting up some excellent minor league numbers he had a taste of the bigs with the Braves in 1952 and made the team in 1954, breaking in with a splash. He went 14-9 that year with a 2.96 ERA, making the first of three All Star squads and finishing third in R-O-Y balloting.

Meanwhile he signed a pro basketball contract to play in the off season. Conley went on to play for six seasons in the NBA winning titles with the Celtics in '59, '60 and '61. He finished his basketball career with a couple of seasons with the Knicks.

On the diamond Conley's career with the Braves was highlighted by winning the 1958 World Series. But his numbers hadn't matched that rookie season. He pitched in the 1957 Series against the Yankees, getting roughed up in one short appearance.

He moved on to both the Phils and Red Sox before retiring in 1964 and had some success in both cities. Along the way he had some interesting times which are chronicled here in a Boston Globe story, well worth the read. His wife has written a book about his career(s) and their life that can be seen by scrolling down on this page.

Pretty cool when you think about the fact that he got to win titles playing with both Hank Aaron and Bill Russell! And his WSU Huskies team was ranked #2 in college hoops in 1950.

Conley founded and ran a paper company after his playing days. Pretty sweet pictures below of Conley on the mound. His size makes him quite an intimidating sight for batters. 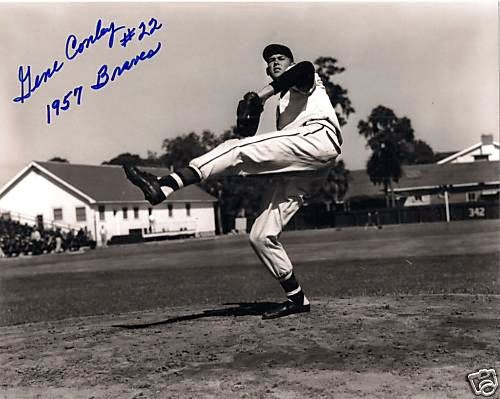 The 1959 Topps Conley is a red Phillies card, one of only two issued. He is shown in his Braves uni as he had come over from them prior to the season. And as an aside, Gene Conley looks like a much taller version of my father when he was young.
Posted by Commishbob at 10:46 AM