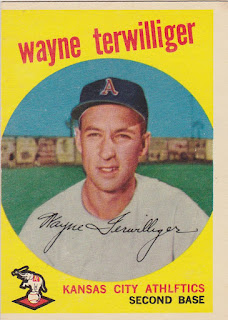 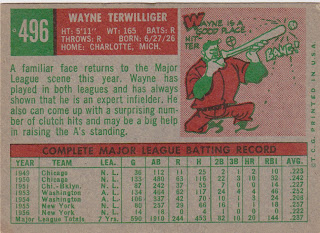 Busy times around this household so I probably can't give Wayne Terwilliger his due. Known as 'Twig', he was brought up in Michigan and joined the Marines in 1943. His service exploits as a radioman on a tank in the Pacific theater are pretty thrilling. Here's an except from Baseball in Wartime.

He entered military service with the Marines in 1943 and seved as a radioman on an amphibian tank in the Pacific.Corporal Terwilliger participated in the invasions of Tinian and Iwo Jima, and had his tank knocked out at . "We were hit and the tank bogged down,” he told The Sporting News on April 26, 1950. “We had to abandon the tank. Everybody scattered into the nearest fox holes. But at just about that time a Jap tank rolled up and began blasting away."I knew I had to get out of there, so I ran for the beach, zigzagging in and out with the tank chasing me.I'm sure I'd be lying out there somewhere  now, if it hadn't been for one of our own tanks, which luckily showed up while I was doing all that broken field running.They knocked out the Jap tank."


In a big league career that stretched from 1949 to 1961 Twig played for the Cubs, Dodgers, Giants, Senators and A's. Along the way he had a couple of seasons as a full time second baseman but he primarily was a platoon and utility player. His minor league career reads like a travel log.

Following his playing days Twig began a long career as a coach and manager in several organizations and in independent leagues. He finally retired from baseball at the age of 85 in 2010. He spent 62 years in the game.

He's had a book published about his life and career and has a pretty snappy website as well.

My copy is way off center but still pretty sharp. It posed a question that I've come up against before when upgrading this set. Do I want a sharp mis-cut or a raggedy well centered card. Twig shows the answer.

EDIT: I noticed that the card appears to list the team name as 'ATHFTICS'. Hard to tell if that is actually an 'F' and therefore an error or if it is an 'E' that was somehow mangled and is a printing plate mistake.

Here is a closer look: