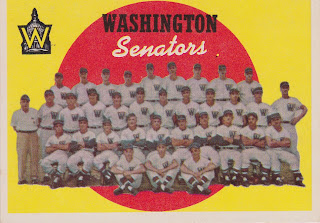 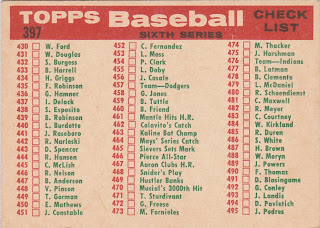 Been quite awhile since I had a team card up here.
The 1959 Washington Senators went 63-91 and finished their usual eighth in the AL under Cookie Lavagetto. It was Harmon Killebrew's first year as a full timer and he led the AL with 42 homers. There was more pop in the lineup with Jim Lemon (33 homers) and Bob Allison (30 homers). Roy Sievers chipped in with 21 more. Nobody hit much for average though. Lemon led the regulars with .279 while nobody else hit .270.
Camilio Pascual won 17 as 'ace' of the staff. Pedro Ramos, years before he anchored the Yankee bullpen, was #2 on the staff and went 13-19. He and Pascual both made the All Star team as did Allison, Killebrew and Sievers.
Here's an odd yet strangely compelling web page about the Senators franchise. Can't get to the other pages but there are some interesting pictures.
Nice clean example of the card. Checklist back is unmarked. Marking doesn't bug me but unmarked is a nice bonus.
Posted by Commishbob at 9:01 AM