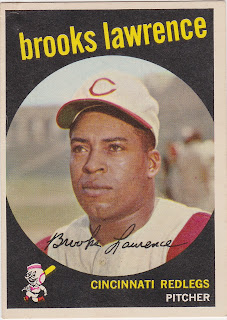 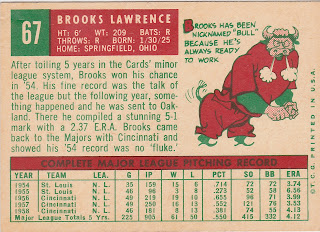 Brooks "Bull" Lawrence was a righthanded product of Ohio when he was drafted by Cleveland in 1949. Prior to that he had pitched a year for Miami of Ohio and a couple of seasons in the Negro Leagues. He did a five year tour in the Army during WWII.
The Indians dealt Lawrence to the Cardinals and he debuted in the majors (finally) in 1954 winning 15 games. He couldn't duplicate that the next year and was traded to the Reds. He went 19-10 for the '56 Reds and made his only All Star squad. He won 15 the next year but never hit double digit wins again.
The Reds released him in 1960 and he finished his career with some minor league time that year in Havana and Indianapolis. After retiring Lawrence worked in private business, in the Reds' front office and as a head baseball coach at Wilmington College.
There is a youth baseball league co-named for Brooks Lawrence and Harvey Haddix in their hometown of Springfield, Ohio. In 2010 the Springfield Sports Hall of Fame presented a Brooks Lawrence exhibit. There's a Facebook link on that page but I don't do Facebook so I likely and shut out.
Here's another upgraded card. My original one was pretty beaten up. I like the write up on the back that states that in 1954 Lawrence was the 'talk of the league' but then 'something happened'. And the cartoon is kind of creepy I think.
Posted by Commishbob at 7:16 AM