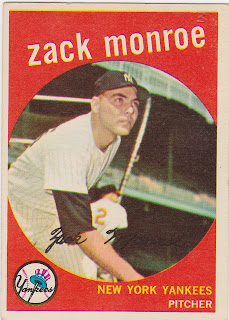 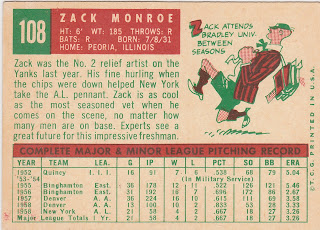 I'm on vacation in the New York area, visiting friends and relatives and doing a few touristy things. The over/under on visits to Ralph's Pizza in Nutley N.J. is three. Take the 'over'. The plan is to go blog-free for the duration so these next few entries are auto-posted quickies.
Zack Monroe had an impressive minor league record before he debuted with the Yanks in 1958, He went 4-2 with them in 24 games and got into a World Series game, getting shelling in a one inning stint. He had a cup of coffee with the Yanks in 1959 and then was sold/traded/signed by/drafted by (?) the Reds where he spent a couple of minor league seasons.
Monroe pitched for Bradley University and as the cartoon says, he continued his education between seasons.
Classic '50s Topps card. Pitching follow through pose, Yankee Stadium stands and facade in the background.
Posted by Commishbob at 11:36 AM