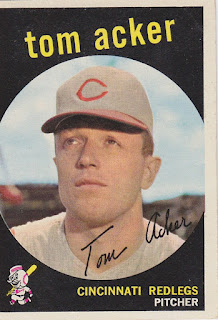 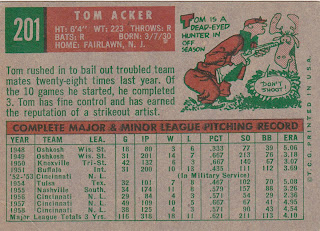 A 1948 NY Giants signee Tom Acker spent a few years in their system and the military before emerging with the Reds. He made his big league debut in 1956 and spent four complete years there. He pitched in 153 games for the Reds through 1959 including 23 starts.
He won nearly half of those 23 when he went 10-5 in 1957. He was dealt to the A's after the '59 season and appeared in the Topps 1960 set as a member of that club but didn't appear in a major league game. He did pitch briefly in the Yankee system that year before leaving the game.
Not much about Tom Acker appeared as I drove down the Google highway. And I'm not sure what to make of the grey crown Reds' cap he's wearing. It's one they wore as a roadie for several seasons. In general I haven't liked the gray caps worn recently (Royals, Orioles, etc.) but this one I like.
A black frame Reds card is always cool. Nice shape as well. Does anyone have any Tom Acker stories?
Posted by Commishbob at 5:47 AM