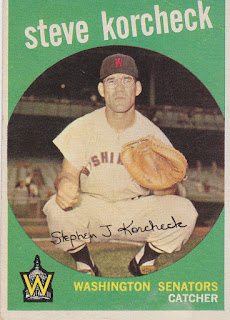 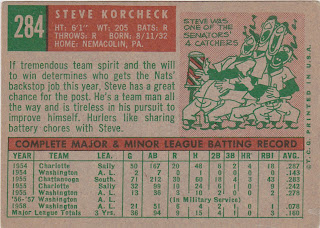 Steve Korcheck was a 1954 graduate of George Washington University (my father was a 1951 grad) where he played both baseball and football. He was the Colonials' captain and garnered several honors as a football player... He was drafted by the 49ers in the third round in '54 as a center but chose to pursue a baseball career by signing with the Senators.... he played in parts of four seasons with the Nats beginning in 1954... served two years during the middle of his pro career doing military service... he hit .159 with seven RBIs in 145 at bats over those four seasons.... his final shot at baseball was a stint in the Senators minor league chain in 1960.
Korcheck returned to GW as head baseball coach and earned his Masters and a EdD... he worked as an instructor for the KC Royals and went on to become president of Manatee Community College in Florida..
Sometimes the players who seem the least interesting at first glance have the best backstory... I wonder if my father saw him play for GW, likely so... Tom Owen's has a nice little interview with Korcheck on his Baseball By The Letters blog... Korcheck has received GW's Distinguished Alumni Award and is a member of their sports Hall of Fame...
The Senators sure had some dull unis back in the day... I wonder if Korcheck is honored to have a prominent spot on this blog's banner? Yeah, right..... not a bad card, it's a little soft and miscut but the colors are still bright.
Posted by Commishbob at 10:48 AM