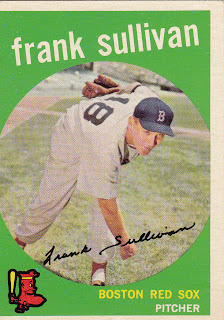 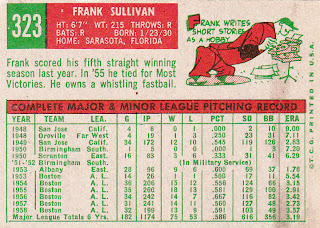 Happy St. Patrick's Day to Frank Sullivan. I'm not Irish myself but I'm sure one or two of you are out there planning a celebration.  And so in honor of the occassion we take a look at Frank Sullivan. He's a fine Irish lad* on a green bordered card so it's pretty much a given that he'd appear today.

Sullivan was a late 40's Red Sox signee and after a tour of their system and a stint in the military he jumped from 'A' ball to the Sox for a 14 appearance stint in 1953. The following season Sullivan began a string of five double digit winning seasons toiling for some decent Red Sox clubs. He tied Whitey Ford and Bob Lemon for tops in the AL with 18 wins and led with 260 innings in 1955, heady stuff. He had the league's best WHIP in '56 (as if they tracked that!). Made a pair of All Star squads along the way.

By the end of the decade the Sox fortunes had slipped and so had Sullivan's numbers. He was moved to the bullpen and then dealt to the Phils and on to the Twins before retiring after 1963.

You may note that the card's cartoon speaks of Sullivan writing short stories as a hobby. Well, that hobby became an avocation after his playing days and his settling in Hawaii where he still lives. He turned those short stories into a book called Life is More than Nine Innings. Check the link. It's a nice website that contains more about Frank Sullivan and his career.

Nicely off-center card, no? The back looks nearly white in the scan but it's actually the gray cardboard that Topps used before the later series in '59. I think I need to learn more about this damn new scanner. It's another of the dozens and dozens shot in Yankee Stadium showing the left field area. No way my Dad and I are not in at least one of these cards!

*=I'm making an assumption here, but I like my chances of being correct.

Semi-related note: There is an Irish American Baseball Hall of Fame. It's located in New York inside Foley's Bar on 33rd Street across from the Empire State Building. I'm going to be in New York this summer, I may check it out. Frank Sullivan is not a member btw. Maybe if he had been a Yankee?
Posted by Commishbob at 7:33 AM