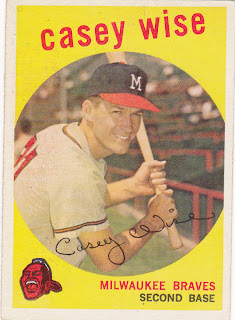 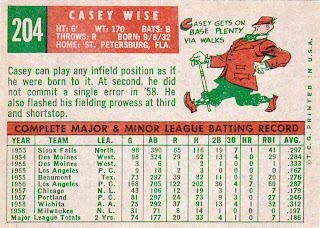 Casey Wise a.k.a Kendall Cole Wise... 'Kay Cee', get it? Classic 'good field, no hit' infielder. He hit .174 for his career which consisted of 321 at bats over four seasons.

Wise began in the Cubs organization and hit pretty well. He made his debut with the Cubs in 1957 was traded to the Braves the next year and finished with the 1960 Tigers.

Before you write this guy off consider this... he had three big league homers and got himself a World Series share in 1958. He actually came up to bat in a World Series game in Yankee Stadium. OK, so Ryne Duran struck him out... how many of us have gotten to bat in a World Series? Or had two homers and a triple in one big league game including a dinger off Vinegar Bend Mizell? (one previous homer and he hits two in a game? And a triple? Holy cow!). Or actually worn that amazingly gorgeous Milwaukee Brave cap on a real big league diamond? So there.

His dad Hugh, and brother, Hugh Wise Jr. both played pro ball. His father played for the Tigers and was a scout for decades. Why Baseball Reference doesn't make note of that I don't know. His brother played in the Braves' chain for a few years as an outfielder.

After he retired Casey Wise became an orthodontist in Florida. His brother was a doctor as well and through Google I believe he does/did scientific research in D.C. Pretty cool family.

Blame my scanner for the dark around the edge on the card. It's really much nicer than it looks here.
Posted by Commishbob at 7:15 AM