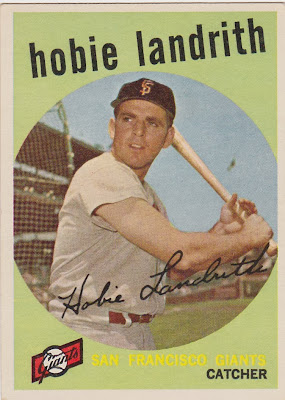 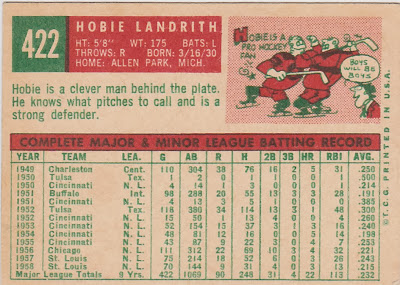 One of seven brothers, all of whom played catcher at Northeast High in Detroit, Hobie Landrith got his first taste of the major league life as a 15 year old kid. He was asked to catch batting practice for his hometown Detroit Tigers by a Tiger scout. The story behind this (and the rest of a really neat interview) can be found right here. Landrith went on to play at Michigan State University before signing with the Reds in 1949.

He debuted with the big club in 1950 while getting a four game taste and did the same in 1951. In '52 he got a slightly longer look and he made the Reds as a back-up catcher in 1953. He spent three seasons as a part-timer in Cincy before being traded to the Cubs for 1956. That year he played in 111 games and had career highs in at bats and RBI. But the next season saw him in St. Louis where he played two seasons before moving to the Giants for three.

In 1961 the Mets made Landrith the first player selected by the team in the expansion draft. Casey Stengel is credited with an oft repeated quote. When asked why they chose Hobie Landrith Casey explained that you have to have a catcher or you'll have a lot of passed balls! On May 12 of that first Mets' season Landrith homed to give the team a walk off win.

But Landrith played in only 23 games for the Mets before he was traded to the Orioles who in turn dealt him to the Senators early in 1963.  In 14 full or partial seasons in the majors Landrith batted .233 and hit 34 homers. His longevity came be credited to his defensive skills and handling of pitchers more than any hitting prowess. He coached for the Senators briefly after retirement and then went into public relations and sales for California Volkswagen dealerships.

That looks to be the Polo Grounds behind Landrith in his card. He sports a poorly inked-in Giants logo on what was probably a Cardinals cap in the original photo. My copy of this one is pretty much near mint. My scan doesn't make the colors look as vibrant as they really are.

EDIT (March 2014) A tip received as the blog wound down has clarified the site of the photo on this card:.


"There's some confusion over where the photo for #422 Hobie Landrith was taken. It's Wrigley Field. If the stands aren't a giveaway, look under his right arm - the angled brick wall down the left field foul line made famous many years later by Moises Alou and Steve Bartman.Topps didn't shoot any photographs in Chicago in 1956, unsure about 1957, so this is probably Landrith in a Cardinals' road jersey with the cap airbrushed, taken in 1958."

Landrith, by the way, is the only major leaguer with the given name of Hobart. There have been over a dozen in the minors however. My favorite name among them has to be Hobart Van Alstyne. With a name like that he should have been the King of Prussia instead of a late 19th century ballplayer for teams like the 1886 Binghamton Crickets.
Posted by Commishbob at 1:34 AM