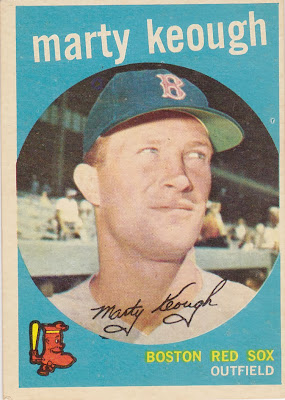 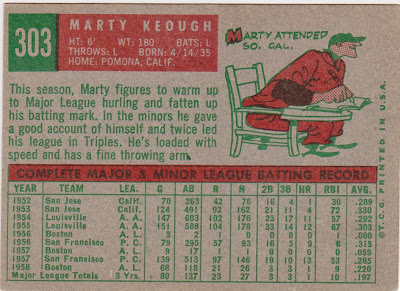 Marty Keough was California kid who signed as an outfielder with the Red Sox in 1952. He hit well enough as a prospect to move up the ladder and he got a couple of looks by the Sox before he made the club in 1958 as a bench player. He got into almost 70 games and although he didn't hit much he was back in 1959 having won over the team with his speed and much improved fielding. He improved his hitting and got into nearly a hundred games with Boston that year. But the Red Sox had more outfielders than they could use and early in 1960 he was traded to the Indians.

He finished that season with a .248 average and was selected by the Senators in that winter's expansion draft. 1961 in Washington proved to be Keough's busiest season as he had over 430 plate appearances and hit 9 homers to go with a .249 average.

He was traded once again that winter, this time to the Reds where he spent four uneven seasons, sometimes in a platoon role and sometimes, like in 1965, with no role at all. The Reds sold him to the Braves on the eve of the 1966 season but within six weeks or so he was traded yet again, this time to the Cubs.

He was done with playing in the majors after that but he did spend another year in the minors before putting in a year of baseball in Japan. He has stayed in the games as a minor league manager and scout for several organizations since he ended his playing days.

Keough is part of a baseball family that includes two brothers, a son and grandson all of whom played at least at the minor league level. His brother Joe played in the majors for six years with the A's, Royals and White Sox. Brother Tom was briefly in the minors and also played college baseball and football for Cal including All American honors and a Rose Bowl appearance.

While working as a scout Marty Keough recommended his son Matt as a third base prospect. Matt Keough was drafted by the A's as a pitcher and went on to have a nine year career with several clubs, mostly the A's and was a member of the 1978 AL All Star squad. Finally Matt's son Shane was a prospect in the Athletics organization for four seasons beginning in 2007.

Marty Keough's story is best told on his SABR bio page. His card shows him in what appears to be a smirk, obviously pleased with whatever was happening out near the mound as he posed near the third base dugout at Yankee Stadium.

Worth noting is that this entry easily broke a personal record for "Most Open Tabs While Researching". That happens when you look up a guy with four other ball playing family members.
Posted by Commishbob at 6:30 AM