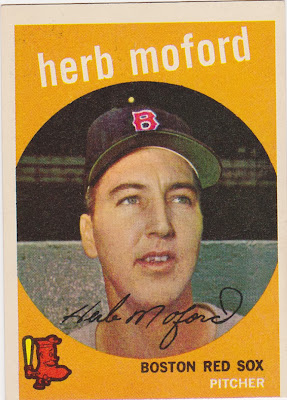 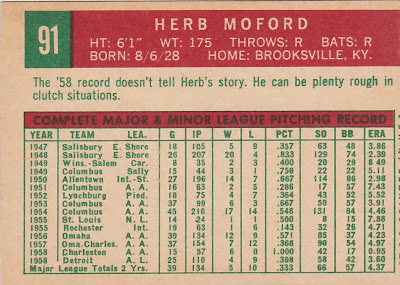 Kentucky righty Herb Moford spent enough time in the minors that his '59 Topps cardback doesn't have room for a cartoon. That sort of thing is usually reserved for longtime stars like Warren Spahn and Stan Musial.

Moford signed with the St. Louis Cardinals in 1947 and worked his way through the Cards' system for eight seasons pitching for nine different clubs before he made the big league roster in 1955. He pitched in 14 games through mid-June. All his appearances came in relief until he got a start in the Polo Grounds, got cuffed around by the Giants, and was farmed out once again.

In 1957 the Cards dealt Moford to the Tigers and he spent the second half f the '58 season as a swing man for Detroit, going 4-9 in 11 starts.His 361 ERA during that stretch was easily the best of his spotty career. Traded to the Red Sox that winter Moford made a couple of April starts for the Sox and was his very hard.

The Orioles acquired him and after a couple of minor league seasons he was purchased my the Mets for whom he made his last big league appearances in 1962. He was one of four pitchers who appeared in the first ever game in that franchise's history. He retired to tobacco farming and ranching soon thereafter and even dabbled in politics as the campaign manager for wacky Jim Bunning's run for the governorship of Kentucky.

It seems he was a decent sort of guy and maybe he should have run for governor instead of Bunning. This is Moford's only card and he's airbrushed into a Red Sox hat. Under that garish 'B' is likely a Tigers' 'D' since he'd been traded in December this early series card was probably out by March.
Posted by Commishbob at 6:30 AM