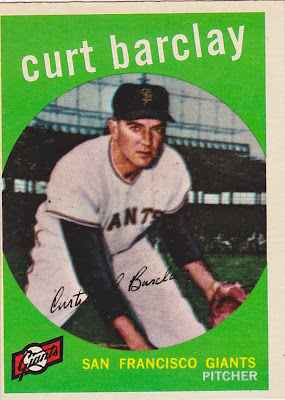 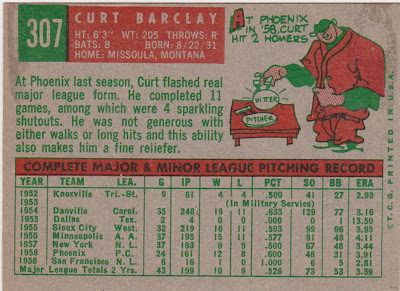 After signing with the Giants in 1952 out of the University of Oregon Curt Barclay finished that season with a nine game taste of pro baseball before he spent 1953 in the military. Returning to the States in '54 Barclay ascended the Giants' farm system with three impressive seasons.

He made the Giants staff in 1957 and was the #3 starter, finished second on the team in wins (9) and had the best ERA among the starting staff. He moved with the club to San Francisco but injured his shoulder early in the '58 campaign and spent most of that year and the next trying to work his way back up to the Giants from their AAA club. After his injury he managed to appear in just seven games for the Giants. His last big league appearance was a rocky 1/3 of an inning that he had in April of '59. He finished out his career with 12 games of minor league ball in 1960.

After his playing days Barclay worked for a lumber manufacturer. He died at the age of 53 in 1985. During his days at Oregon he played alongside Earl Averill on the ball field and was a starter on the basketball team that featured 'Jungle Jim' Loscutoff who played on seven Celtic NBA title teams.
Posted by Commishbob at 6:30 AM