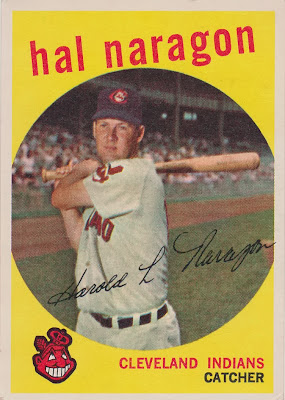 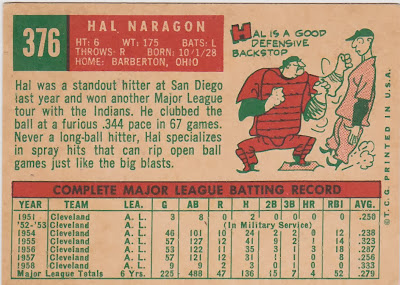 Catcher Hal Naragon spent all or part of 10 seasons in the majors between 1951 and 1962. He averaged about fifty games a year in his eight complete big league campaigns. Signed by the Indians in 1947 Naragon worked his way through the team's minor league system while hitting adequately but without any power.

In 1951 he got a look at big league pitching with a late season call-up but then proceeded to spent the next two years in the military. He returned in 1954 just in time to play behind Jim Hegan on the Indians' A.L. championship club. He continued to spell Hegan for most of his time with the Indians through 1957. He was farmed out for much of '58 and was traded to the Senators in May of 1959.

He managed to play a bit more than he was used to with the Nats that year and ended up with over 240 plate appearances. He played sparingly through the franchise's move to Minnesota, mostly sitting while Earl Battey played, and ended his active career after the '62 season.

He stayed on with the Twins as bullpen coach through their 1965 Series effort and then moved on to do the same job with the Tigers. He earned a ring in Detroit in 1968. On both clubs he worked with pitching coach Johnny Sain. He also lost both jobs when Sain lost his after having issues with the clubs' managers.

He currently resides in Ohio where he was raised and the high school stadium in his hometown of Barberton is named for him. His SABR bio is here and you can here his opinions on the 2013 Indians in a recent interview on and Ohio TV station site.

Yet another Yankee Stadium shot with Naragon resplendent in the classic Indian uni of the era.

Here is Hal Naragon going into the crowd to try for a foul ball.