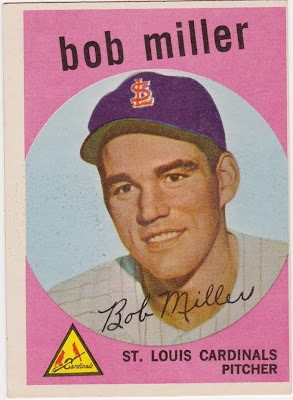 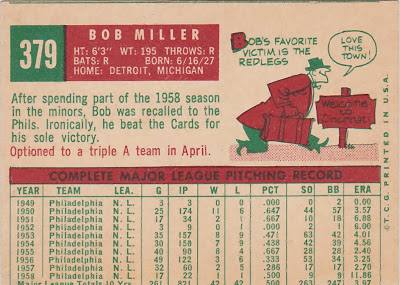 There have been four guys named 'Bob Miller' to play in the big leagues, all of them pitchers and three of them nearly pitched in the bigs at the same time. Our featured Bob Miller, the only one to appear on a '59 Topps, was a member of the 'Whiz Kids' Phillies club of 1950. That was his first full season in the majors and he won 11 games as he finished second in the Rookie of the Year voting. Late that season, after beginning the year 8-0, Miller hurt his back and his effectiveness diminished.

He started (and lost) the fourth and final game of the World Series. In that game he allowed two runs (just one earned) on a pair of hits and a wild pitch. A game opening error contributed to his demise. With the Phils facing elimination he was on a very short leash that day.

His back woes continued to plague him into 1951 and in fact he was never able to match that rookie year. He spent 1952 in the minors and then returned to the Phillies and pitched through 1958, pitching primarily as a starter for a couple of years before moving to the bullpen. On August 9, 1953 Miller tossed a six hit shutout and had four hits of his own in a 7-0 win over the Cubs.

He finished his career with a 42-42 mark and a 3,96 ERA. He had been signed out of the University of Detroit by the Phils and he had served (and pitched) in the Army before his pro career began. After his playing days he went back to coach his old team at the University of Detroit for 39 years and worked in the insurance business. A very nice interview with Bob Miller appeared last summer on MLB.com.

He's pictured on this card as a Cardinal but he was only a member of that club for a short time and he never pitched for them. Late in 1958 he was sent to St. Louis in a conditional deal but the Cards returned him to the Phils the following April. He pitched in the minors very briefly that year before hanging up his glove. Topps re-used a picture of Miller that had been around for awhile and just airbrushed in a St. Louis cap logo.

Here are some of the cards of Miller that used that same photo: 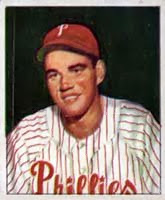 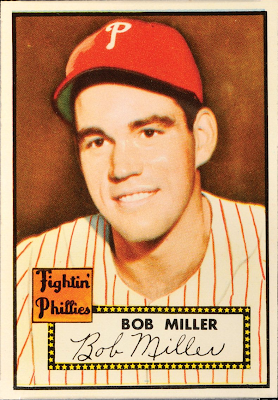 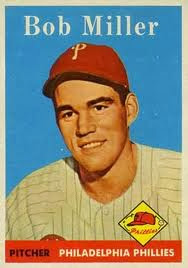