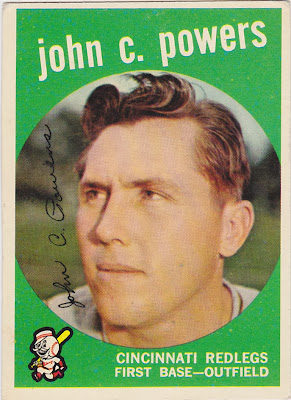 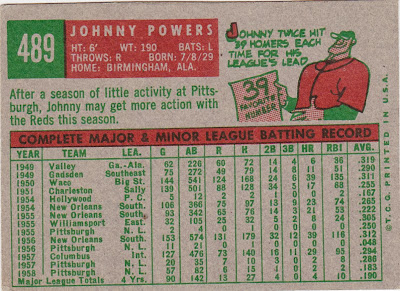 Outfielder Johnny Powers signed with the Boston Red Sox in 1949 and spent one year in their system before he was traded to the Pirates. A two year military stint interrupted his travels towards the big leagues but he hit with power at every stop.

He earned increasingly longer trials with the Bucs from 1955 trough 1957 and he made the club in '58 and stayed all season. But he had very little opportunity to show his talents and was traded to the Reds for 1959 and thus gets the Reds' logo on this card. But even there he didn't play much and was sold to the Orioles in the off season. 1960 proved to be a busy year for Powers. He was the opening day right fielder for the Orioles but quickly played his way out of a job and was sold to the Indians in May. They in turn dealt him back to the Pirates three weeks later. He spent the rest of 1960 and the next five seasons in the high minors, never getting another shot at the majors.

Powers finished with six homers in 151 big league games. He had nearly 300 in his long minor league career. He died in 2001 in his hometown of Birmingham, Alabama. A few side notes came up in checking his career:

--I came across a few references to a story of a foul ball hit by Powers hitting and killing a fan in Miami in 1960 when he played for AAA Columbus.

--There was no other 'John Powers' in the majors at the time of this card yet Topps chose to use 'John C. Powers' on the front. 'Johnny Powers' is used on the reverse. Interestingly there was a Rockabilly performer of some note who was popular at the time and he bears a passable resemblance to 'our' Johnny Powers. Check it out: 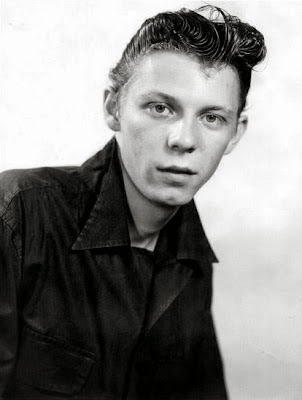 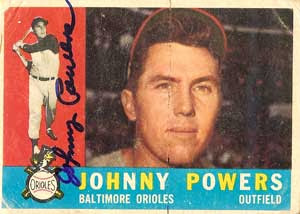