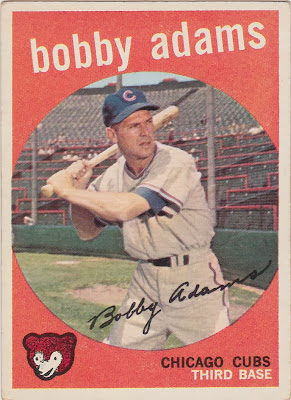 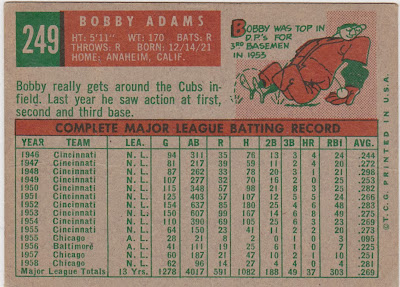 Infielder Bobby Adams was 37 years old and in the last season of his pro career when this card was issued. He had signed with the Cincinnati Reds way back in 1939 and spent four seasons in the minors, three of the hitting well over .300. Interestingly he was signed by the Reds as part of a sort of 'family deal' that included his brother Dick Adams.

After the 1942 season both Adams brothers were called to military service and they played alongside Joe DiMaggio in California. Bobby Adams remained in the service through 1945 and re-joined the Reds organization the following spring. He made the big club and played in a platoon/utility roles until he worked into the Reds' full time third base job in the early 1950s.

Always a good fielder, Adams led the league in games played and at bats in 1952 while hitting .283 on 180 hits which was good for third in the league. He even garnered a few stray MVP votes that year. He played everyday again the following season but after that his performance and playing time waned until he was dealt to the White Sox in 1955. He moved on to the Orioles in '56 and then to the Cubs in '57. He played sparingly through 1958 and after three games played in 1959 he was sent to the minors where he saw his final action as a pro.

After his active days Adams served in several capacities in baseball, as a coach, league executive and players association executive. He also raised a major leaguer, son Mike Adams who played for three different clubs in the 1970s.


From the site I linked above comes this picture of the 1943 Santa Ana Army Base team. Bobby Adams is front row, fourth left. His brother Dick is back row, sixth left and Joe DiMaggio is front row, second right. 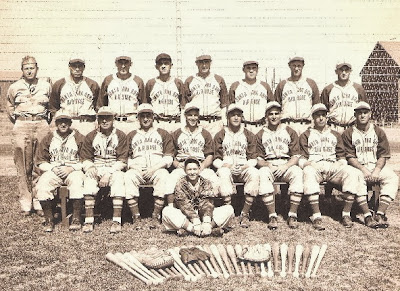 In the late '40s picture below Bobby Adams is the guy (#12) greeting the runner who is scoring on a wild throw to the plate. I'm always fascinated by how close to the action they allowed photographers to get in those days. 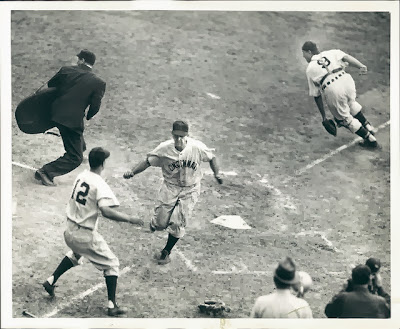