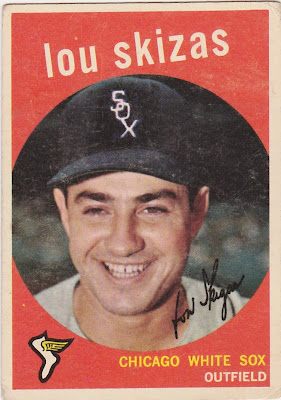 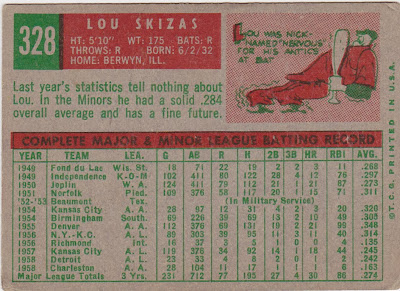 As soon as you get to Lou Skizas' Baseball Reference page and you see that he was known as "The Nervous Greek" you know that there is an interesting story here. And when you check out the first paragraph of his SABR bio, you know that there most certainly is:

“I was a character in baseball. I saw it as an interim type of career,” Lou Skizas told Bill Gleason. Skizas, known as “The Nervous Greek” during his four-season major-league playing career, was perhaps best known for an unusual ritual that he followed before coming to bat. Before reaching the plate, the right-handed-batting Skizas dropped his bat, covering it with dirt. Then, wiping the bat off by rubbing it between his pants legs, he kissed the end of the bat before reaching into his back pocket at least three times to touch an object that was said to be a good-luck piece. Placing all of his weight on his right leg, Skizas kept his left foot off of the ground until just before the pitch reached the plate. This was the unorthodox style that belonged to the man Casey Stengel once called “the greatest natural-looking hitter I've ever seen.”

Skizas was born in Chicago and raised in a home where only Greek was spoken. He claims to have been labeled as 'retarded' (his words) when he first entered school because he didn't know what his teacher was saying. As a ballplayer in high school he caught the eye of Yankee scouts and was signed in 1949 and while playing in their farm system he developed a close friendship with Mickey Mantle that remained in place all their lives. Skizas spent two seasons in the military along with his five years in the minors before he got a token shot with the Yankees in 1956. He was dealt (as all marginal Yankee players were then) to the Kansas City Athletics in May of '56.

He hit .316 in about 300 at bats that year and held down a regular outfield spot for the club in '57. That winter he was part of a huge 12 player deal that sent him to the Tigers with whom he split the '1958 season between the majors and minors. The White Sox drafted him prior to 1959 but traded him to the Reds early in the season. He was therefore technically a part of the Sox' AL champion club but he was long gone by the fall. He played for three season in the Reds' chain and one more in Detroit's, never again making a major league appearance. He also played in Cuba during the winter of 1959.

He finished with a .270 lifetime average and had 30 homers. After retiring Skizas finished a bachelor's degree he'd been working on for over a decade and then went further by adding a masters and doctorate in biology. He was a college professor in Illinois at Illinois State and the University of Illinois-Champaign along with coaching the schools' baseball teams.

As late as the 1990s he continued to be part of the game as a part-time scout for the Cubs in the Chicago area.