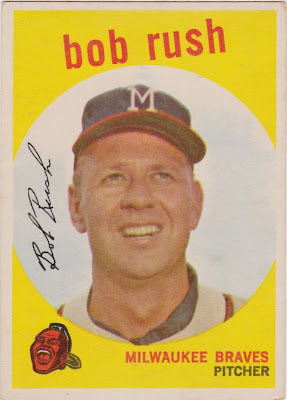 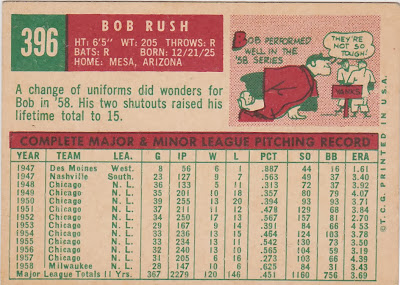 Bob Rush gets his card in this set as a member of the Braves but he was a Chicago Cub for most of his career. He was so much a Cub that he married a woman whose maiden name was Addison.

Signed out of South Bend, Indiana by the Cubs in 1947 Rush spend one season in the minors (a pretty successful one btw) and earned a place on the roster in '48. He made it into 36 games that year including 16 starts and he went 5-11 with a sub 4.00 ERA. The next season he won 10 and that was the first of seven seasons in which he won in double digits for some less than stellar Cub teams.

He went 13-20 in 1950 but had a respectable ERA and made the NL All Star squad. On June 11 Rush and pitcher Warren Spahn of the Braves each stole a base against each other; no opposing pitchers again stole a base in the same game until 2004. His best year came in 1952 when he posted a 17-13 mark to go along with a 2.70 ERA and a win in the rain-shortened All Star contest. He won 13 games in three of the next five years on the North Side but his below par 1957 season caused the Cubs to deal him to the Braves.

That year he started (and lost) Game Three of the World Series against the Yankees. He went six innings that day and while he only allowed three hits to the Bombers he issued five walks. Two of them scored and that was all the Yanks needed.

He pitched into the 1960 season with Milwaukee, becoming a reliever, and was sold to the White Sox that summer. He finished that year with the Sox ans was released. He then retired.

Bob Rush's Wikipedia page claims he was the 'best granpa ever' which I think is kind of a neat think to have edited in by a loving family member. A South Bend sports writer eulogized Rush after his 2011 death in an online posting. His middle name is Ransom which is only significant because I was reminded of 'Handsom Ransom' himself, Randy Jackson.

Bob Rush wasn't much past 30 when the picture on his card was taken but he already looks like he'd be a great candidate for being the 'best granpa ever', don'tcha think?