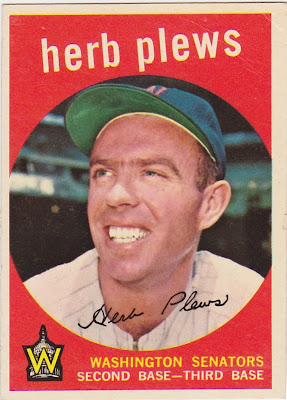 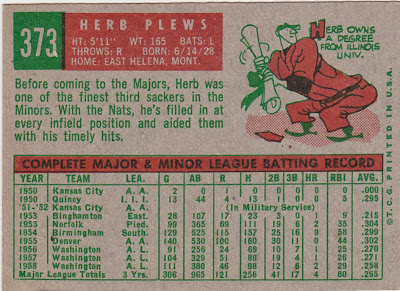 Herb Plews is one of 181 players who have gone from the University of Illinois-Champaign/Urbana to the ranks of pro baseball. One of them is a Hall of Famer, Lou Boudreau.

Plews was signed by the Yankees out of UI in 1950. He took spent four seasons as a pretty good hitting infielder and a couple of years in the service before he debuted with the Washington Senators in 1956. He had been traded by the Yanks to the Nats that winter. With Washington Plews spent three years as a semi-regular at second base and filling it at third and short.

His numbers were actually pretty good for a middle infielder as he hit .264 with 82 RBI for Washington. He was traded to the Red Sox early in the 1959 season. But after only 12 at bats in 13 games he was shipped to the minors when the Red Sox finally integrated their club by bringing up Pumpsie Green.

Beginning in 1960 Plews was an everyday infielder in AAA for five different organization over six seasons. He retired in 1965 and currently resides in Denver.

There sure is a lot of Herb Plews material available to read. Here is a Denver Post article about Plews in his days as a Yankee farmhand in Denver. He was part of one of the best minor league teams ever assembled. Hobby blogger Tom Owens recounts his interactions with Plews in this entry. Here is another lengthy but worthwhile interview done in 2010. And of course SABR has perhaps the definitive Plews bio.

Herb Plews' smiling visage in Yankee Stadium on his '59 card seems to reflect his overall personality and character. These traits come through in all those articles. For a guy I'd never really been aware of he seems to have acquired quite a fan base among writers.