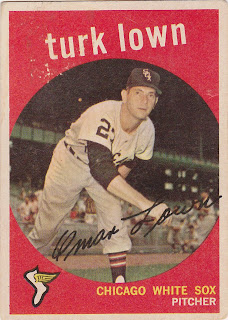 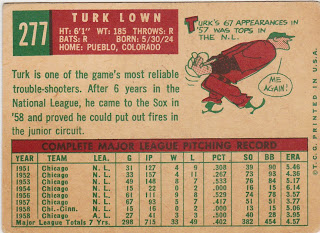 Turk Lown has to be the 20th White Sox pitcher with a red framed card and a shot taken at Yankee Stadium with the 3rd base side grandstands in the background. OK, maybe not the 20th. But there have been several and they tend to run together and when you add in the nearly identical Detroit Tigers' pitchers' cards.... well, I am getting deja vu all over again.

Anyway, Turk Lown (real name Omar Joseph Lown) came out of Brooklyn and was signed by his home borough Dodgers in 1942. After a year in the minors he spent three years in the military and then returned to pitch his way up through the Dodgers' system. He had some pretty good years along the way. But the Dodgers being the Dodgers Lown had a hard time squeezing himself into a big league role and in 1951 the Cubs rescued him via the old Rule 5 draft.

He and Jerry Staley formed a formidable one-two bullpen punch in 1959 for the pennant winning Sox and manager Al Lopez gave them much of the credit for that clubs' success. Lown led the way with a league high 15 saves. He appeared three times in the World Series that year and allowed two hits and no runs in 3.1 innings.

Lown slumped in 1960, rebounded with a good year in '61 and after a decent year in 1962 he left the game. He'd been released by the Sox and turned down an invite to the Reds' spring camp. He took a job with the postal service in Colorado and worked there for many years.

I love the S-O-X caps the White Sox wore in the late 50's. And the touch of red on the cap's lettering was duplicated in the stirrups. Those road unis are pretty sweet. So, maybe having all the Sox pitchers in the same type shot isn't so bad. My copy is a replacement and it's still one of the lesser quality cards in my set. It looks better in person but the scan brings out the surface marks.