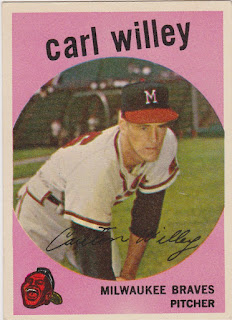 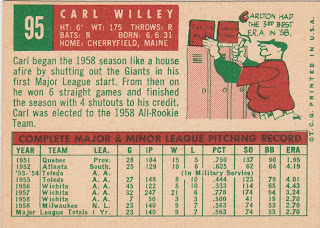 Carl Willey (I always heard him referred to as 'Carlton') was a Maine resident when he was signed by the Braves in 1951. Some nice minor league seasons (25 wins in '51-'52) were interrupted by a two year hitch in the service. When he returned he had a pair of mediocre season before blossoming in 1957 when he won 21 games.

In early 1958 he made the Milwaukee roster, was sent back to the minors for a stretch and then returned to the Braves where he went 9-7 in 19 starts and had a league leading four shutouts. He pitched an inning in the World Series' Game Five that year and whiffed two of the three Yankees he faced. He pitched four more seasons with the Braves but never could match his first season.

Sold to the Mets for the '63 season Willey won nine games in a career high 30 starts. An injury plagued 1964 (broken jaw, arm miseries) kept him sidelined quite a bit. He opened the '65 season with the Mets, spent some time with their AAA club, returned to the bigs to end the year but retired that winter.

Willey spent nearly a decade as a scout for the Phillies after retirement and then worked an assortment of jobs in his home state of Maine. He died in 2009.

His SABR bio is here but it's not as colorful as Sal Maglie's. How could it be? He's got a nicer card than The Barber, though....the oddly attractive pink frame and of course the mighty fine Braves uni. The cap alone makes it a winner.