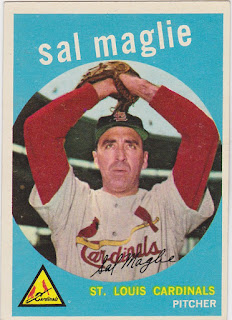 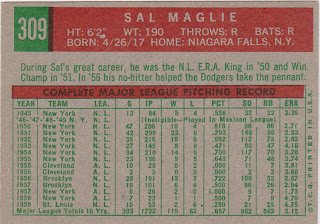 Sal Maglie is one of the most interesting guys I've come cross in blogging the '59 set. Out of Niagra Falls Maglie signed with the New York Giants in 1938. He spent five uneventful seasons in the Giants chain and at one point left the game and worked at a defense plant in New York. (He had been rejected for military service for a sinus condition). He then returned to baseball, pitched in the Giants chain and debuted in 1945. When the '45 season was over Maglie jumped to the Mexican League after having issues with Manager Mel Ott. That earned him a five year ban from the majors.

During his five years away.... well there is no way I can capture the color of Maglie's career in a blog post. And there is no point in re-inventing the wheel. I refer you to the exceptional SABR bio which is found here and is highly recommended.

The short version is that Maglie became a highly successful pitcher for the Giants and Dodgers and garnered more major league time with the Indians, Yankees and Cards. He's one of about a dozen players to have been with all three original New York franchises. He had been released in April of 1959 and therefore was out of the game by the time this card was issued by Topps.

He finished with 119 wins, a 3.15 ERA, an ERA title, a wins title and World Series title and one of the coolest nicknames in baseball history, 'The Barber'.

There is a You Tube video of a 1956 appearance Maglie made on the old "What's My Line?" TV show. It was broadcast live on the evening of October 7, 1956. That was the same day as the fourth game of the World Series.  The NEXT DAY Maglie pitched and lost in one of the most celebrated World Series games ever played, Don Larsen's perfect game. On the panel is Yankee Phil Rizzuto who was wrapping up his career. The video is here. It runs immediately upon opening the page so I didn't embed it. Here's a still shot. 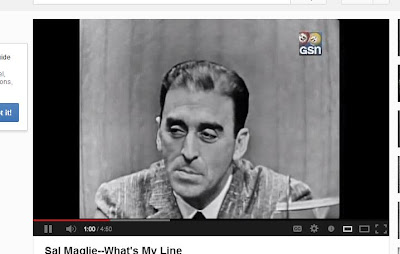 He had pitched his own no-hitter just two weeks prior to the Larsen perfecto.

His post playing career life was a roller coaster of triumph and tragedy and again I refer you to the SABR bio or this book available on Amazon.

edit: Amazon link cleaned and replaced. Dunno what was up with that