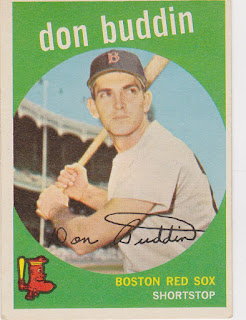 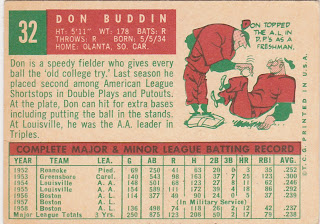 From what I've been able to read shortstop Don Buddin took the brunt of the Boston fans' wrath during the 'down years' that were the late 50s/early 60s for the Red Sox. Those clubs were pretty terrible and, Boston being Boston, someone was going to get the blame. From a Dan Shaughnessy column published in the Boston Globe in 2011 following Buddin's passing:


If John Lackey thinks he’s got it bad now, he should have talked with Don Buddin. Buddin was the early-day Julio Lugo. And the nasty stuff from the stands sounds louder when there are only 8,000 people in the ballpark. You hear everything.

“It was bad,’’ recalls Frank Malzone, who played third base next to Buddin for four long seasons. “He got off to a bad start and the fans gave him a hard time when he came to the ballpark. I played right next to him. Hearing all these guys hooting and hollering at him, I was thinking, ‘Better him than me.’ I would hate to walk out there and hear that every day.’’

Bill Buckner is unfairly remembered for one error. Buddin is remembered for constantly making errors. Buddin led the league in errors twice. He committed 35 errors in 1959 and 31 in 1958. In 1960, when he started only 121 games, he committed 30 errors. His nickname was “Bootsie.’’ The Globe’s inimitable Clif Keane quipped, “Buddin’s license plate is E-6.’’

Buddin was a star on the gridiron in high school and passed up some nice college offers to sign with the Sox in 1952. He showed some hitting promise (a .300 and a .293 season) as he moved up to the majors. He debuted in 1956 and held down the starters job at short while hitting .239. He spent the next season in the military and returned to Boston as the starter for four more years.

His hitting numbers were not 'Mendoza- like' as he twice had double digit homers and hit between .237 and .263. The Sox traded him to the Colt .45s for 1962 and they in turn sold him on to Detroit that summer. The '62 season was his last in the bigs. He bounced around the minors after that for three years.

He returned to his native South Carolina after his playing days and was involved in Special Olympics and he made appearances in Major League Old Timers games.  Apparently he never did return to Fenway Park. that's OK though, he looked better at Yankee Stadium anyway.

Pretty sharp if unremarkable card up there. Green frames have not been seem much here lately. The photographer got the Yankee Stadium facade into the shot nicely I think.

Lastly I was struck by the first line of Buddin's back of the card text... "Don is a speedy fielder who gives every ball the old college try". Are they trying to tell us that they think he sucked, too? But in a nice way?