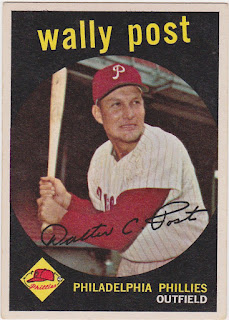 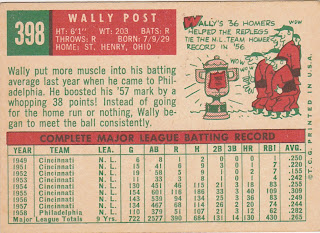 Wally Post signed on as a pitcher with the Reds organization in 1946 and won 17 games the next season in 'D' ball but by 1949 he'd moved to the outfield. The Reds likely wanted that big booming bat  put to better use than appearing every fourth day. Post split the next four seasons between the Reds and the minors until he got a full time shot in 1954. He took the right field job and held it nearly full time through the 1957 season.  During that time he belted 114 homers. His best season came in '55 when he batted with 40 homers and 109  RBI.

But lack of contact on a consistent basis (he topped the NL in whiffs three times) led to a trade to the Phils for 1958. He spent two and a half seasons with Philadelphia, was traded back to the Reds and then with his numbers and playing time declining, finished his career with a couple of stints in the AL, with the Twins and Indians.

Post was elected to the NL All Star game in 1957 but was replaced by Hank Aaron when Commissioner Ford Frick ruled that Reds' fan had 'stuffed' the ballot box. Post was injured and would have been unable to play anyway. That was Post's only All Star 'selection'. He hit .333 with the Reds in the '61 Series loss to the Yanks. He homered off Bud Daley in the final game, Game Five. Post hit the first ever home run in Dodger Stadium in April of 1962. He is a member of the Reds' Hall of Fame. He died at the age of 52 in 1982.

If you have never seen any of the original Home Run Derby shows you should take a look at this one featuring Wally Post versus Hank Aaron which aired on April 3, 1960. Apparently the videos are watchable at numerous sites but I first found it at Hulu and, except for the online commercials, it looks great and plays flawlessly. Be warned that the video starts as soon as the page loads so make sure you have your speakers at an acceptable level.


Wally Post, Gus Bell and Ted Kluszewski on the cover of SI in 1956. 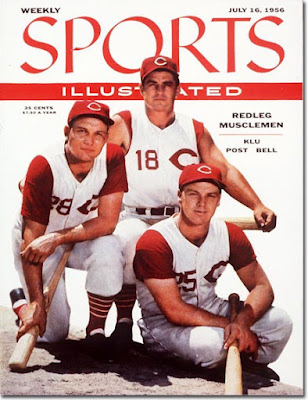