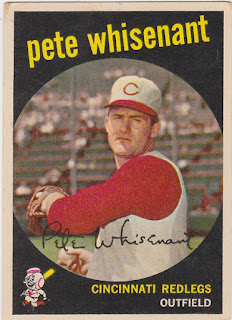 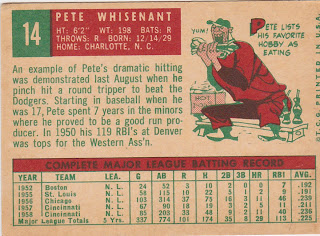 Pete Whisenant had one season of semi-regular outfield duty getting almost 350 at bats with the Cubs in 1956 and spent the rest of his eight big league seasons as a fourth outfielder. He was signed by the Braves in 1947 and debuted with them in 1952 following a year of military service. He's apprenticed for a major league spot by showing good power and a spotty batting average in the Braves system.

Whisenant spent those eight seasons with six different clubs. In addition to the Cubs and Braves he played for the Reds (obviously), the Cardinals, Indians and Senators/Twins. He had two separate runs with the Reds, the second coming in his final big league season, 1961.

He coached for the Reds for a season or so immediately after he retired as an active player and then returned nearly two decades later to manage in the A's chain. I found a sort of neat story posted by a blogger on his non-sports blog that tells a story of Whisenant giving a baseball to the then young blogger's mom. It's a quick fun read.

Another nice black framed Reds card. And another shot with San Francisco's Seals Stadium's distinctive red railings in the background. This is Whisenant's second straight cool looking card as he appeared on a black 1958 Topps the year before. Here it is as a scan I found on the 'net. I like the '59 better. 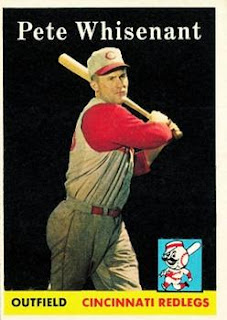